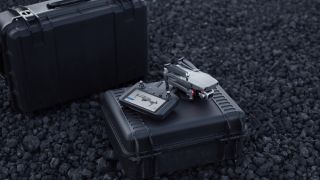 At CES 2019 in Las Vegas, DJI has taken the opportunity to show off a new addition to its line of camera drone accessories – the Smart Controller.

It’s exactly what it sounds like, but more. Far from a straightforward remote control, this is a sophisticated, hardy device with a built-in 5.5-inch built-in screen – and it comes with a $650 price tag to match.

You do get a lot of functionality for that price though, and being able to decouple your drone from your smartphone has plenty of advantages, with quick pairing functionality that lets you get the drone into the air as fast as possible.

And of course, there’s the big advantage – battery life. The Smart Controller will last for a maximum of 2.5 hours, even with its big display operating at twice the brightness of a smartphone, and it can also travel in conditions you wouldn’t want to bring your phone into, able to operate in temperatures as cold as -20°C and as hot as 40°C.

If you’ve got a newer drone like the Mavic 2 Zoom or Mavic 2 Pro, you can take advantage of DJI’s OcuSync 2.0  video transmission system, which instantly transmits vivid, crisp images from the drone to the Controller. There’s also a little freedom if you want to experiment outside the DJI ecosystem, with the Controller’s Android dashboard supporting not only the DJI Go and DJI Pilot apps, but also various third-party editing apps.

There’s also new SkyTalk functionality, which allows you to livestream your aerial videos to Facebook, Instagram and other social platforms, and DJI GO-Share, which instantly transfers images from your drone to your phone.

The DJI Smart Controller is going to be available from today onwards, at a starting price of £579 / $650. DJI says that bundle packages of the Controller with the Mavic 2 Pro and Mavic 2 Zoom will be available, with exact details yet to be announced.

CES 2019: cameras, kit and all the launches in one place

UK new drone laws – what do they mean for you?