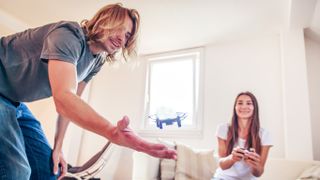 Wherever you’re doing it, and for whatever reason, flying drones is a lot of fun. Nowhere is that more pure and true than indoors. You get all the fun of close quarters' flying, the relative safety of compact quads, and complete freedom from any aviation regulations (until you fly out the window).

Theoretically, of course, any drone can be flown indoors, so long as it’s kept away from the fixtures and fittings, but some are definitely better suited to it than others. They can also be a lot more wallet-friendly.

Most camera drones, built for outdoor use, feature GPS, which becomes useless indoors. They also have cameras designed for aerial photography rather than First Person View (FPV) piloting, and inappropriate radio control systems. The best drones for regular use are designed for the outdoors.

Far better to use a craft suited to indoor use. If they’re small and light, making the indoor world seems bigger by comparison. They generally feature propeller guards to avoid any damage to the drone, furniture, people or pets nearby, and ideally a camera with a wide field of view.

Because there is such an overlap with the fast-moving toy world, there are a lot of choices; some of the newer products have the advantage of mass-production prices, while some of the established drones offer more in terms of features and quality.

Here's our selection of the best indoor drones you can currently buy, to suit all tastes and budgets.

The best indoor drones for 2020

This is the best tiny indoor drone: easy to fly mini drone with kid-friendly controller

The A20 fits in the hand with room to spare, and in a crowded marketplace it stands out on build quality (not least the chunky propeller guards) and simplicity of both use and design. Many mini drones come with confusing controllers with an array of push-buttons for calibration, but the Potensic is elegant. There are two thumbstick controls and shoulder buttons to operate the camera and cycle thorough the three speed modes.

This drone, the A20W, is part of an organized line from Porensic; if you want a bit more size, there is an A30W, and if you feel you can forgo the WiFi FPV camera – which you view via your phone – then look for the models without W at the end; they look the same but place an ordinary LED where the camera would be.

Best indoor drone for children (and for big kids!)

Eschewing the traditional remote controller with sticks approach, this drone wants to get up close and personal, responding to hand gestures from inside a complete protective cage. This lack of complication and total finger protection make it ideal novel fun for children of all ages.

To get in the air, you simply toss the drone cage into the air and the motors will kick in. It’ll slowly but continuously rotate and it has two IR sensors on opposite sides which it uses to detect and avoid your palm – so essentially you can “push” it without touching it. It maintains altitude, but also has an IR sensor on the bottom so you can “push” it up too. Finally the motion sensor will shut it straight off it hits something, with the cage absorbing the blow. Simple but effective. If you get your hands near the sensors on both sides (which isn’t as easy as it sounds) then it’ll even attempt a flip.

The only physical interaction you’ll need is via the on/off switch at the bottom and the small charging port (which connects to a standard USB socket). The cage has a good balance of flex and rigidity, the packaging and manual is good, and – while Scoot offer other versions – this with UFO-like LEDs – is definitely the favorite. There is no camera, and you can’t practice your controls, but it’s a lot of fun.

While some of the drones on this list are toy-grade, this is in every respect a consumer-grade product, with quality packaging, safe-looking batteries, and a full set of features. It is a little more expensive than some, but you get what you pay for – not least the Intel and DJI tech on board. That includes a downward-facing sensors which make for stunningly stable hovering and auto landing, and the ability to react to a wall bounce.

At first you’ll have fun flying it around the house like any other drone, sneaking round doors using the FPV video on your phone screen (you can also use an optional game controller). There are button-press flips and stunts to impress friends and family, but really that’s just the start.

You can capture still photos at 5 megapixels and video via the app (from the same camera that you see through as you fly); the video is digitally stabilized and looks much better than equivalents in this price bracket. Thanks to visual block-based programming tool Scratch, you can experiment with programmed flight. Since Scratch is often used in schools as a way of introducing programming, it’s easy to learn, and rewarding.

The Parrot Mambo is the granddaddy of indoor drones, and has been through several iterations thanks to its flexible design. Sadly Parrot only list one version for sale now, but it’s a good one: The Mambo FPV. Nonetheless it’s well worth looking out for other editions, like the “Fly Kits” set which included a tiny canon, a grabber claw, or note grip which were ideal for conducting covert missions across an open-plan office!

All this flexibility comes from the Lego-like Smart Block attachments at the top; in the FPV edition this is used to clip on a camera which feeds video to your phone, which you clip into the pleasingly comfortable goggles. You can control the drone via your phone and Parrot’s free app, but in this edition the actual input comes via a Bluetooth remote since the phone may well be clipped in your CockpitGoggles.

The drone also makes use of an ultrasound sensor, camera and barometer for stable hover, so if you let go of the controls it will just hover (Parrot, after all, know more than a thing or two about drones having essentially created the trend over a decade ago). On the outside that design experience is also reflected in slide-in-and-out batteries and the cool LED “eyes” that give the drone just enough character!

Drones have been embraced as professional tools and fun toys, but there is another dimension – a dedicated hobbyist community (with their own racing and freestyle competitions). At the cutting edge this side of the hobby relies on separate goggles, radio controllers, specialist batteries & chargers, and ultra-low-latency analogue video signals. Many enthusiasts build their own drones, but this “Ready to Fly” kit gets you in the air faster.

The tiny drones – the Whoop category, as the fans say – are idea for indoor flight. It features a camera which can be tilted to an aggressive angle (so it is level when the drone is traveling forward at speed), atop a very strong frame, this drone is the perfect craft to master the skills of FPV racing. It’s durable enough to survive the knocks, has a strong radio, and the powerful brushless motors can reach stunning speed.

The analogue video system eliminates the digital encoding/decoding latency which toy drones are prone to, so you feel a direct connection to the world you see through your goggles. There are three modes to get you going, but it is tricky to master and there are a wealth of options which could be bewildering to non-geeks; this is really a gateway drug to quad racing.

The ultimate ‘toy’ drone for serious flying indoors and out

$399
View at Dell
$399.95
View at Apple
$469
View at Amazon
See all prices (19 found)
High quality video indoors and out
Can be used outdoors too
Manual exposure control
Not suitable for fast flight indoors

The Mavic Mini isn’t cheap but with a 2.7K / 12 megapixel camera on a gimbal stabilizer it is capable of producing a quality of video comfortably above anything else on this list. That, in combination with the Cinesmooth slow flying mode makes it perfect for capturing gentle moving indoor shots, ideal for venue promo videos or realtors.

DJI supply propeller guards for the drone in the pricier “Fly More” kit, or they are sold separately cheaply – they’re a sensible investment. (It’s worth noting that they do put the weight over 249g, so shouldn’t be used outdoors unless you’ve registered your drone).

Outdoors the Mavic Mini is very capable (it’s on our list of best camera drones). Indoors is sometimes a problem for drones which rely on GPS but, as long as there is enough light, the Mavic Mini is able to hold its position indoors using a downward-facing optical flow sensor. All the other features are unimpaired, so the altitude remains stable. That said, it’s a good idea to be sure no papers are lying around in your flight path; compared to indoor drones there is a bit more down-draft.