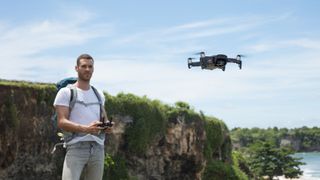 The DJI Mavic Air, one of many camera drones that will now require registration. Image: DJI

The UK government’s Department for Transport has announced its proposed changes to drone laws, following a consultation that began in July of 2018.

The move comes at a time when drone use is under increased political and public scrutiny following a highly publicised incident at Gatwick Airport, where flights were grounded for more than 36 hours over the Christmas period following a string of drone sightings close to the runway. The perpetrators of this incident have still not been identified.

The government has released the full report, which you can read here. We’ve summarised the key points below:

Key takeaways for drone users – what do the new measures mean?

The new drone bill is only in the draft stage and hasn’t officially passed into law yet. If it does so without major amendments, here are the main changes that will affect drone users:

•  The area around airports where drones are forbidden is being extended, to approximately a three-mile radius.

•  Operators of drones weighing between 250g and 20kg will need to be registered. Registered drone users will be required to take an online competency test.

•  Police will be granted power to land drones, and to compel operators to produce their licence documentation to prove they’re allowed to fly their drones.

•  Police will also be able to search premises (with a warrant) and seize any drones they suspect have been used in a criminal offence.

•  Police will be able to hand on-the-spot fines to drone misusers, up to a maximum sum of £100.

What does this mean for me?

Assuming you’re a responsible drone user who isn’t larking about near an airport runway, relatively little. The main thing you’ll need to do is register your drone and get your paperwork in order from November 30 (which, if you’ve been following this news to any significant degree, is something you were likely aware was coming).

DJI has already released a statement welcoming the new measures, describing them as ‘a sensible balance’ between protecting the country’s infrastructure from drone misuse and protecting the rights of individual drone users.

“We are pleased to see that the new rectangular restriction zones around airport runway approach paths address the risk at airports in a way similar to the latest version of DJI’s geofencing technology,” said Christian Struwe, Head of Policy at DJI EMEA. “This will provide smarter protection for airplanes in critical areas during takeoff and landing and is in line with established aviation practices.”

It is worth noting that none of the measures proposed would have stopped the Gatwick drone disruption, as the drone was already in a restricted zone and the user has not been identified.

If you're using a drone to film in the US, there's a chance your device will be shot down