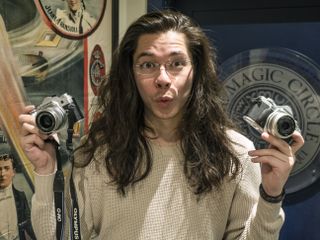 While most years yield a rich bounty of incredible, innovative and inventive new cameras, it's fair to say that 2019 brought us some of the most exciting kit we've ever seen – including a few bodies that genuinely rewrite the rules for photographers.

We're very privileged at Digital Camera World to play with virtually every new camera that gets released – which also means that it takes a lot for a camera to stand out of the crowd and actually impress us. So, now that the dust has settled, what are our favorite cameras of 2019?

Here are our best picks of the year from the core DCW team, as well as our extended family from Digital Camera magazine, PhotoPlus: The Canon Magazine, N-Photo: The Nikon Magazine and Digital Photographer…

There has been a lot of truly incredible kit this year. For me some of the highlights include the remarkable Sony A7R IV with its 61MP hi-res imaging, the Olympus OM-D E-M5 Mark III with its brilliant balance of carefully considered features, and I'd even shout out the Xiaomi Mi Note 10 for being the first phone to deliver 108-megapixel photos. However, my personal favorite camera of the year is another 100MP monster: the Fujifilm GFX 100.

Its sky-high resolution is undoubtedly the headline-stealer, but just as impressive is the remarkable five-axis image stabilization that takes rock-solid shots with that massive medium format sensor. I took this out for an afternoon shooting around Leicester Square and it performed amazingly for street shooting. Yes, I used a 100MP medium format camera for run-and-gun street photography and it was brilliant at it! I absolutely adore this body, and using it was the most fun I've had taking photographs all year long.

If we wanted to throw this list back to 1975, then my trusty Olympus OM-2 film camera would technically bag first place on my favorite camera of the year list. However, in the spirit of keeping this article slightly more relevant, I was honestly very pleasantly surprised by the Nikon Z50 this year.

While I've been shooting Nikon for over 10 years now, I've never been particularly bowled away by any of its APS-C cameras – but that all changed with the Z50. Small and light, this tiny ergonomic marvel gave me even more faith in Nikon's burgeoning Z system – and made me very excited to see what will come next.

I have been taken with the amount of great drone photography I have seen this year – and it is now regularly winning major competitions. For this reason, the DJI Mavic Mini is my camera of the year.

This drone has been designed to avoid the need for registration with the authorities in the USA and the UK, but although it is only 249g it is no lightweight. It shoots 12-megapixel stills and 2.7k HD video, and has a really respectable battery life and range. It is the ideal model to bring aerial photography to a wider range of users.

The Nikon Z6 was released at the tail end of 2018, but I’d argue that its new ability to output RAW video and accept CFexpress cards is enough to think of it as a whole new camera. The video upgrade enables users to shoot 12-bit 4K UHD or FullHD RAW via compatible Atomos recorders (in ProRes RAW), which makes Nikon the first manufacturer to output RAW video directly from a full-frame mirrorless camera over HDMI.

CFexpress card support is free (via Firmware 2.20) but, if you haven’t already or don’t plan on buying the Nikon Z6 Essential Movie Kit, the video upgrade comes at a price. That said, this is a serious video upgrade and one that makes the Z6 even more appealing to filmmakers.

I've been lucky enough to try out some cracking mirrorless camera and lens combinations this year, plus spend time with pros using them on assignment. The one that impressed the most, though, has been the Panasonic S1R. Some mirrorless systems get a bad press for having small bodies and large lenses, but Panasonic has got the balance spot-on.

At first glance the S1R’s body does look to be a bit of a chubber, but in the hand with the kit zoom on it's very well balanced – and no more fatiguing in prolonged use than a full-frame DLSR. In-body image stabilization and excellent low-light performance garnish the S1R’s compelling feature set and comfortable handling. And don’t forget that, with Panasonic being one third of the L-Mount Alliance, Leica and Sigma glass bolsters the growing range from Panasonic.

There are so many candidates, but I'm picking the Olympus OM-D E-M5 Mark III. It's small, it's light, but it packs in so much – like 4K video, probably the best in-body stabilization there is, a vari-angle touchscreen, 30fps Pro Capture, a 100-shot RAW buffer depth, brilliant live composite and live bulb long exposure modes, really good (and customizable) Art Filters, focus bracketing and access to an excellent lens range.

Honorable mentions, though, to the Nikon Z 50 (for design and value), the Leica SL2 (superb design and interface) and Fujifilm GFX 100.

The Canon EOS Rebel SL3 / Canon EOS 250D packs in some impressive features for such a compact and entry level model. It’s so small and lightweight that it could easily be mistaken for a mirrorless camera, but inside it boasts some brilliant tech – including a substantial 24.1MP resolution APS-C sensor for fantastic image quality, and a Digic 8 processor to suppress noise when shooting at high ISO values. It also takes on the standard Canon EF/EF-S mount, so it can be paired with a massive range of fantastic Canon optics.

I personally own a Canon EOS 100D (released in 2013) and it still holds up today, so I’ve got a soft spot for this series, but the new model crams even more features into a tiny package – including a flip-out vari-angle touchscreen, which makes composing at awkward angles a total breeze, and the ability to record richly detailed 4K movies.

My camera of the year has got to be the Fujifilm X-Pro3. Despite the undeniable shift towards mirrorless cameras in the industry that we've seen this year, I'm still a longstanding lover and user of chunkier DSLRs. It's a testament to the retro-inspired X-Pro3, then, that I not only enjoyed shooting with it, but felt positively challenged to see differently with it in my hand.

Slowing down in our world seems almost taboo, where busyness and productivity is worn as a badge of honor, but using the X-Pro3 in a more slow and measured way nods to the days of film – a change of pace that I welcomed. The Fujifilm X-Pro3 is a camera that some will love and others simply won't 'get'. The array of features and film simulation modes available are impressive – as long as you like the design.

It's 'only' an enthusiast-level DSLR, but the Canon EOS 90D is possibly the best APS-C DSLR camera in the world right now – and my pick of 2019. It's a huge step up from the trusty-but-dated Canon EOS 80D, and borrowed some of best specs from the 7D Mark II sportster to give you a hard-hitting enthusiast machine with a new 32.5MP sensor, 10fps burst-mode shooting, Digic 8 processor, and 45 cross-type AF points.

I was very impressed with how the 90D was able to lock AF on fast-moving action in low light when testing it. With it's 1.6x effective focal length, thanks to the APS-C crop-sensor, it makes the 90D a great camera for wildlife and sports photographers. Oh, and it's also got uncropped 4K video, and is Bluetooth and Wi-Fi ready.

Nikon wowed us with its first Z-mount cameras in 2018 in the shape of the Nikon Z7 and Nikon Z6 – but these top-of-the-line mirrorless machines came at a price. In 2019, the mirrorless for the masses came along. The Nikon Z50 swaps the full-frame sensor for a cropped APS-C variant, and forgoes in-camera image stabilization, instead building vibration reduction into its matching lenses.

The twin lens option of a super-slim 16-50mm kit lens and 50-250mm telephoto zoom is unbeatable value, especially as it's already seen cracking discounts to under a thousand bucks at some retailers, despite being so fresh on the shelves.