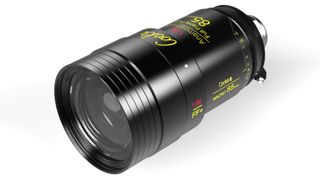 Cooke Optics will be presenting its latest lineup of lenses, including the new Anamorphic/i Full Frame 85mm Macro T2.8, at the BSC Expo taking place at Battersea Evolution, London, from 31 January to 01 February.

They will all be on display in both the Standard and the SF coating variants. The latter, standing for Special Flair, represents "the next logical step in the evolution of filmmaking, when using full frame sensors, producing true front anamorphic characteristics," according to Cooke. The SF coating enables cinematographers to produce even more exaggerated lens flare than anamorphic lenses already exhibit.

That noise you can hear is JJ Abrams, practically starting a fire by rubbing his palms together with glee.

Also on show at the event will be Cooke's range of spherical S7/i Full Frame Plus Primes (which possess the same /i Technology that facilitates frame-by-frame digital information capture), as well as the recently released Anamorphic/i SF 35mm-140mm zoom lens, along with optics from the Panchro/i Classic vintage-look range of primes (reminiscent of Cooke's Speed Panchros).

Cooke has been one of the leading lens specialists for TV and film for over 100 years. Based in Leicester, England, the company's optics are highly prized among serious cinematographers for "the Cooke look", which has contributed to the visual flair of everything from The Wizard of Oz, Spartacus and the original Star Wars to Bohemian Rhapsody, Game of Thrones and Peaky Blinders.

For more information on the BSC Expo, visit the BSC website.