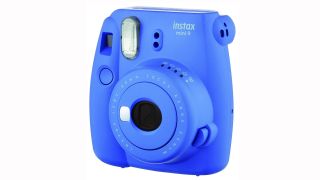 The  instax line from Fujifilm is the most popular instant camera brand out there –and the fantastic top-selling instax Mini 9 is down to the bargain price of just £44.99 in this UK Amazon End of Summer Salve deal today! This £25 saving is  available on the Cobalt Blue version of this instant print camera. But there is an even better price of £42.99 on the lime green version of the same camera..

Fujifilm instax Mini 9 Cobalt Blue: was £69.99, now just £44.99
One of the most popular instant cameras out there, and for good reason – this cute looking Instax is the perfect thing to take to parties, and produces credit card-sized snaps no matter where you are! Just don't forget to pick up some film…
UK deal – ends midnight August 22View Deal

Fujifilm instax Mini 9 Lime Green: was £69.99, now just £42.99
One of the most popular instant cameras out there, and for good reason – this cute looking Instax is the perfect thing to take to parties, and produces credit card-sized snaps no matter where you are! Just don't forget to pick up some film…
UK deal – ends midnight August 22View Deal

Sony a6500 mirrorless camera (body only) £649 after cashback
This is Sony's flagship crop-sensor mirrorless camera, which uses a 24 megapixel APS-C-sized sensor. The miniature body comes with built-in image stabilization, to keep your shots steady whatever the lens you choose to use with it, and whether shooting stills or 4K video. You pay £899, but get £300 back from Sony via its summer cashback promotion – making this one amazing Prime deal.
UK deal – ends midnight 22 AugustView Deal

Sony RX100 III large-sensor luxury compact camera £389
This is the best-ever price on this premium point and shoot camera. The key attraction is its large one-inch 20 megapixel sensor, that guarantees much better image quality than your average point and shoot camera, or your smartphone. The Sony Cyber-shot RX100 III has  a 24-70mm f/1.8-2.8 Zeiss zoom built in.
UK deal – ends midnight 22 AugustView Deal

SanDisk Extreme Pro 256GB SDXC memory card  - £55.50
Save £39
Looking for more cards for your DSLR, mirrorless camera or camcorder... then you need some of these. Amazon has knocked 42% off  this respected line of UHS-I cards. It has an impressive max speed of 170MB/s and a V30 video classification, so great for shooting sport, wildlife, weddings and 4K video.
UK deal – ends midnight 30 AugustView Deal

SanDisk Ultra 64GB microSDXC  £8.97 (was £17)
Save 44% on this 64GB microSDXC card from trusted brand SanDisk, which offers transfer speeds of up to 80MB/s, making it a great choice for Android mobile phones.
UK deal – ends midnight 30 AugustView Deal

DJI Mavic Air - Fly More Combo kit in Arctic White £844
Save £105 The Mavic Air is a stunning technical achievement, an incredibly capable 4K drone that – for most people – would seem to be the only flying camera they’d ever need. With front, downward and rear-facing distance sensors, the drone is capable of identifying obstacles and not just warning the pilot, but also plotting a course to avoid, say, a wall or a tree if needed. This kit comes with a controller, spare batteries and a whole load of other useful accessories.
UK deal – ends midnight 30 August
View Deal

Arlo Pro 2 Wireless Home Security camera system £399.99
Made by Netgear, the Arlo Pro 2 is one of the best wifi security cameras. This VMS4230P kit comes with two cameras that can be used indoors or outdoors and which capture 1080P high-definition video. The units use a rechargeable battery with up to six months operation between charges - so they are easy to install. Unlike some other smart home security systems, you get cloud storage as standard.
UK deal – ends midnight 30 August
View Deal

Amazon Kindle Fire HD10 (32GB) - £104.99 (save £45)
A tablet is becoming a must-have accessory for any photographer... for research, to show others your portfolio or for a bit of light image editing when travelling. The Fire HD10 is our favourite budget tablet - but with this huge Prime Day discount it is a steal. Features a 10in Full HD screen and a built-in Alexa smart speaker. The offer is available on black, red or blue versions of this Android tablet. Alternatively you can go for the up-spec 64GB model of the camera which costs £134.99 during the sale.
UK deal – ends 9am on 31 AugustView Deal