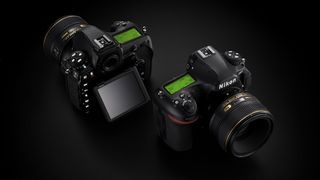 Nikon has impressed and excited many photographers with the release of its new high-resolution D850 DSLR. But should D810 users scramble to trade in their cameras? Or are they better off sticking with the older model?

With a 45.7MP FX-format sensor, a tilting screen and 4K video, the D850 represents Nikon’s most advanced DSLR ever, and proved to be a great way of celebrating the brand’s 100th anniversary at the camera’s recent launch.

All those cutting-edge features, however, come at a price. So, is the D850 worth the upgrade?

As mentioned above, the D850’s sensor is perhaps its biggest headline.

The back-illuminated, FX-format CMOS sensor offers a massive 45.7MP and has no optical low-pass filter in front of it. This is more than enough to create huge prints, and also to offer photographers plenty of tolerance to crop into images without compromising on quality.

Although the older D810 was launched back in 2014, it still offers impressive resolution. In fact, the 36.3MP sensor still beats Canon’s newest EOS 5D model, the EOS 5D Mark IV.

The D810’s sensor also has no optical low-pass filter and is paired with the EXPEED 4 processor, with its ISO range stretching between ISO 64-12,800 as standard and with extensions to ISO 32-51,200 equivalents.

Much has been made of the D850’s video specifications, and rightly so as it makes the camera as appealing to videographers as it does to stills photographers.

The D850 can shoot 4K UHD footage (3840x2160p) at frame rates to 30fps, which is seen by many of today’s videographers as a must-have feature. The camera can also capture Full HD footage at 120fps, which can be used to create smooth slow motion sequences.

By contrast, the D810 doesn't offer 4K recording, although it can capture Full HD footage at up to 60p.

Both cameras have ports for HDMI cables, as well as for headphones and external mics, which means they could easily be used to record professional-quality footage, but if video is the main reason behind your buying decision, it’ll be hard to turn down the D850's 4K capabilities.

What’s more, the D850 takes creative filmmaking further as its technology can be used to produce 8K time-lapse sequences in post production. What’s more, users can extract 8MP stills from the 4K option.

For a three-year-old, full-frame DSLR that offers a beefy 36MP, the D810 is no slouch. It can fire at up to 5fps in its continuous shooting mode, and that figure rises to 7fps when the camera is used with a battery grip (in a DX crop mode).

The new D850 does offer a slight advantage over this, with a standard maximum burst rate of 7fps, which can be increased to 9fps when the camera is used with a battery grip.

While 7fps is perfectly decent, there’s no doubt that the faster rate of the D850 gives photographers more chance of capturing ‘that’ perfect moment, especially when shooting sports or wildlife, where timing is critical.

A fast continuous shooting rate needs to work in tandem with a reliable autofocus system. The D810 features a Multi-CAM 3500FX system that offers 51 AF points, including 15 cross-type points.

By contrast, the D850 features the same high-performance. Multi-CAM 20K AF system that’s found in Nikon’s flagship D5 camera. This offers 153 AF points in total, with 99 of these being cross type and 15 providing f/8 support, which means they will still work when the lens is used with a teleconverter.

The D850 also has the ability to focus down to -4 EV with its central point, and -3EV with the others. The D810, meanwhile, has a rating down to -2EV in total, which means it's slightly less likely to find subjects in tricky conditions.

Each camera is fitted with a 3.2in rear display, but there are big differences between them.

While the D810’s display is fixed and only offers a resolution of 1,229k dots, the D850 features a tilting, touch-sensitive screen with 2,359k dots in total.

The D850’s tilting screen will no doubt simplify setting up awkward low- and high-angle compositions, and photographers looking to move further into video should find the tilting screen helps too, although it could be argued that you could easily add an external monitor if you really need it.

Both full-frame cameras have a durable magnesium-alloy shell and enhanced weather sealing to ensure they can be used in the toughest of environments.

The older D810 is slightly lighter at 980g vs 1005g (with the battery in place) and there is little difference in body dimensions. Some buttons have been moved around, such as on the top plate of the D850, but the layout is generally the same, and D810 users will have no problem familiarising themselves with the newer model.

One clever feature on the D850 is illuminated buttons, which makes the camera easier to operate in low-light situations. The D810, by comparison, does not offer this.

Having been released in 2014, it’s no surprise the D810 can’t quite match the D850 for cutting-edge features.

Noteworthy functions on the D850 include an electronic shutter that allows photographers to capture images in silence, which has obvious benefits to wedding photographers that want to shoot without attracting attention or disturbing the ceremony.

Macro photographers haven’t been left out either as there’s an impressive Focus Bracketing mode, which automatically takes up to 300 shots that can be subsequently merged together to create a single image with front-to-back sharpness.

Using a 45MP sensor will fill up memory cards quickly and put more demands of your computer when it comes to processing the images, so it's good to that the D850 allows users to select the size of Raw file.

The D850 also records to either XQD and SDHC/SDXC formats, whereas the older D810 opts for SDHC/SDXC and CompactFlash slots. The use of XQD also helps that camera to offer a 51-frame burst depth when shooting Raw files, next to the D810's 26 burst depth.

The D850 also offers Wi-Fi, NFC and Bluetooth, whereas the D810 lacks all three.

The D850 is likely to be very popular with landscape and wildlife photographers and, as these two genres typically take place in remote locations, good battery life is essential.

The D810 lived up to this demand, with the battery lasting 1,200 shots between charges. However, the D850 has raised the bar significantly as its battery is said to be good for 1,840 images between charges.

If that's not long enough for you, you'll be pleased to know that both cameras can also be used with separate battery grip. Using the D850 with the MB-D18 grip and EN-EL18b battery (in addition to the camera's own battery) takes this to a staggering 5,140 frames between charges.

Despite being three years old, the D810 is still a very competent DSLR, one that caters for many professional landscape and wedding photographers among others.

It delivers high-quality images that are rich in colour and detail, and if all you capture are stills, you may be better offer sticking with the D810 for another year or so until prices for the D850 drop a little. After all, 36MP is more than enough resolution for most enlargements, or for the demands of magazines and even stock libraries.

However, there’s no mistaking that with the D850 Nikon has produced one of the most impressive cameras of 2017. With the competition from the likes of Canon and Sony, nothing else would have done!

The D850 makes far more sense for videographers, but when you consider the full range of changes elsewhere – better autofocusing, silent shutter, more flexible screen, better burst depth and so on – you can see there's still more than enough to keep stills photographers after the most recent tech happy too.