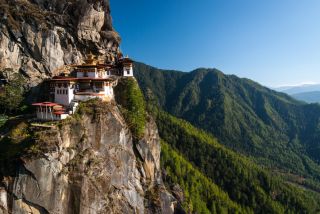 "We have a saying here, we say this is God’s Own Country." Travel around the world and you hear that sentence everywhere you go – none more so than in Asia – and yet there are some areas of Asia that go way beyond the cliche.

Asia has mighty mountains, wet jungles, and temples galore – both pristine and crumbling. It's got colourful culture, incredible wildlife, and ancient traditions. Here are just a few of the best locations for photography worth a visit on any landscape  trip around Asia.

• Directory of holidays and workshops

Remember the pinnacles of the planet Pandora in the movie Avatar? They were inspired by the sandstone pinnacles of Zhangjiajie National Forest Park in the northwest of Húnán Province. A land of mountains, forests, caves, lakes and waterfalls, it's home to macaques, the Chinese giant salamander, Chinese water deer and the almost mystical clouded leopard. The area (whose main sector is actually called the Wulingyuan Scenic Area) gets 20 million visitors each year, but there are plenty of quiet places away from the observation decks around its ‘Avatar Hallelujah Mountain’.

A surreal sight near the Chinese border that's best seen from a Vietnamese junk-boat, Ha Long Bay contains over 1,600 islets. Around 170km from Hanoi, this spectacular UNESCO World Heritage Site is the result of jungle-topped limestone being eroded by tropical rains over thousands of years, and the effects are incredibly photogenic. Cruising, kayaking and rock-climbing are common activities here, so bring a decent camera backpack, and waterproof stuff-sacks.

'The Stans' are making a name for themselves with landscape photographers. One reason is the beautiful Alps-like Tian Shan mountain range that separates Kyrgyzstan from Kazakhstan; near the latter's Almaty city are glacial lakes, craggy peaks, hidden Soviet-era observatories, and even a large population of snow leopards. A few hours east of Almaty, however, down on the plains towards western China is the dramatic Charyn Canyon National Park. Most tourists visit on a day trip and only get as far as the Valley of Castles. If you want to explore its slightly more remote and less photographed Temirlik, Yellow, Red and Bestamak canyons, stay in a yurt or bungalow nearby.

If you're tired of traveling through heavenly places, how about an adventure to see the so-called Door to Hell? It's a one-hit wonder trip in terms of photography, but how about this for something unusual: a natural gas field in the Karakum desert that collapsed into an underground cavern, and now permanently on fire. A three-hour drive north from the capital, Ashgabat, this mysterious sight is the result of Soviet geologists attempting to burn off what they had thought was a small pocket of gas. That was in 1971, and it’s still burning.

Read more: How to travel light without sacrificing image quality

The ancient city of Bagan, southwest of Mandalay, has over 2,000 Buddhist monuments set among countryside. The classic shot is a sunrise vista of temple tops dotted with hot-air balloons, but it's often too windy, so if you're set on that shot – or want to get in a balloon yourself – give yourself at least three attempts. Shwesandaw Pagoda is popular at sunrise, and you can get to one of its top decks and point your camera towards the mighty Sulamani and Dhammayan temples. Although it's a naff location in itself, the modern Nan Myint observation tower is a great place for an overview shot, and it's surrounded by small, deserted and incredibly picturesque temples. Transport here is by e-bike along dusty tracks, and exploring Bagan on your own is highly addictive. Some recent earthquake damage only makes it more photogenic.

Read more: How to photograph from hot air balloons

Another area featuring hundreds of craggy limestone karst formations, Krabi in southern Thailand is home to cliffs, hot springs, sea caves, mangroves, waterfalls, boulders and over 150 islands. From (some of the world's best) rock climbing and caving to coral beaches and castaway islands, its 120km coastline is also a wonderland for divers. Some great places to photograph during a trip to Krabi include Nong Thale Lake, Phra Nang Beach (Railay Bay), West Railay Beach, Blue Pool, Emerald Pool, and Phi-Phi Viewpoint. There are only three places in the world where karst formations are found offshore; Krabi, Ha Long Bay, and Croatia's Dalmatian Coast.

For many landscape photographers, Asia is all about the Himalayas. You can of course sample them in Nepal, Tibet and India, but there are few better places for photographers than this tiny remote country. Only open to visitors since 1974, the Kingdom of Bhutan's most famous pilgrimage site is Taktsang Lhakhang, also known as the Tiger's Nest. Expect snow-capped mountain vistas, prayer flags and maroon-robed monks. For now, it's still off the beaten track, but for how long?

Mount Fuji south of Tokyo might get the crowds and the postcards, but this little-known island just off the tip of Japan's southern province of Kyushu is where landscape photographers should head. An hour by ferry from Kagoshima, Yakushima is covered by incredible cedar forests and is the inspiration for Studio Ghibli's film Princess Mononoke. Head to its Arakawa Trailhead for a hike that takes in some otherworldly forest; think moss-covered rocks, streams and huge cedar trees, with deer and monkeys also in attendance. As a bonus, the northwest of this UNESCO World Heritage island is Nagata Inaka-hama, a beach with seasonal loggerhead turtle nesting grounds. However, beware; Yakushima is one of the wettest places on the planet, so go prepared.

Read more: What's the difference between waterproof and weatherproof cameras?

Is this India's most picturesque state? From quaint canals on its gentle backwaters to tea plantations and spice farms in its rolling Cardamon Hills, there are few more colourful places on the planet. A good place to start is Fort Kochi, a small town with a fading colonial feel. Nearby is Alleppey/Alappuzha, where the backwaters begin; this watery world is one of canals, houseboats, and huge Chinese fishing net contraptions on the banks, and the sunsets are spectacular. Inland is Munnar and its many beautiful tea estates, and Periyar Wildlife Sanctuary at Thekkady, which protects forests, lakes, elephants and (rather elusive) tigers.

There is only one reason photographers come to Siem Reap: the vast temple complex of Angkor Wat spread over 400 square kilometres. The main temple is so very crowded at dawn, but with an early start you can get yourself in place for sunrise to capture its five towers reflected in the ponds in front. If that's too busy – or too much of a cliché – for you, nearby Phnom Bakheng on Angkor Hill is also a great (and much quieter) location for sunrise and sunset. For shots of the jungle reclaiming a temple, head to Ta Prohm – the 'Tomb Raider Temple' – and again brace yourself for mighty crowds (definitely get there before 07:30 am). However, don’t neglect the dozens of other temples in the wider Angkor Wat Archaeological Park; most get ignored, and it’s not difficult to find one all to yourself. The nearby Great Tonle Sap lake has floating villages to photograph, too.