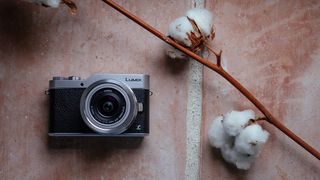 The Panasonic GX800, also known as the GX850, is a keenly priced interchangeable-lens mirrorless camera that puts to rest the company's GF camera series. In replacing the GF7, Panasonic was looking to lure in anyone who had grown tired of the limitations of their smartphone, but not yet upgraded to a mirrorless camera system.

With the Panasonic GX800, we get a Micro Four Thirds sensor with a relatively modest 16MP resolution, yet the ability to shoot not only Full HD clips but also 30fps 4K video.

The camera has many competitors,  but perhaps its closest rival is the Olympus E-PL9, which also resides in the Micro Four Thirds stable.

The GX800 is notable for its flip up 1.04million-dot LCD, which tilts 180° to face the front, and a ‘Self Shot’ mode comes to life when you perform this action.

Naturally there’s also built-in Wi-Fi for sharing such images, although you can also use this functionality to remotely control the camera from a smartphone or tablet.

Helpful, too, is a new-to-this-model ‘Background Control’ mode, which lets first-time users who are looking to get more creative specify whether they want their backgrounds clear or defocused.

There are numerous auto shooting modes alongside full manual controls, and 4K video is also on hand too. Panasonic’s 4K shooting features also include a 4K PHOTO mode that delivers 8MP shots, plus the ability to select a different focus point in the image after capture.

A decent value kit option sees the camera bundled with a LUMIX G VARIO 12-32mm F/3.5-5.6 ASPH pancake-style kit lens, which is a good option for anyone starting out, as the camera’s Micro Four Thirds sensor format ensures the focal range of any attached lens is doubled, which means we have the equivalent of a 24-64mm range here in 35mm terms. Also helpful is the camera’s built-in pop-up flash, though we were less impressed by the 210-shot battery life.

In short, the GX800 is most favourably viewed as an affordable second camera for those who have already bought into the Micro Four Thirds system, or simply want something to recommend to a member of the family who’s seeking to trade up from a smartphone or tablet. It offers a host of features for the price, and makes a solid choice for anyone’s first compact system camera.

Scroll down for more of today's best Panasonic GX800/GX850 deals.