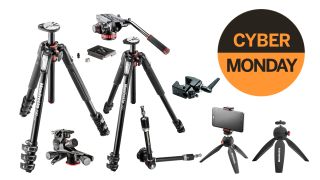 It can be a draining task, trying to find the right tripod for the right money. Don't worry, though – there are some fantastic early Cyber Monday deals on some of  Manfrotto's finest three-legged friends at Amazon UK!

Make sure to check out the current deals on Manfrotto tripod heads, too – and if you need a little help in choosing the correct tripod for your photographic requirements, then why not check out our guide to the best tripods in 2019.

Manfrotto 190XPRO Tripod: £119.25 from £199.95
This professional-standard four-section aluminium tripod is listed at £199.95, but has come down in price to just £119.25 – perfect timing for some winter landscape photography! The collapsible horizontal column mechanism means you can easily switch orientations and the quick power locks on the legs will keep the tripod rock-solid. The 190XPRO has a maximum height of 160cm and weighs 2kg. Tripod head not included.
UK dealView Deal

Get this versatile mini-tripod for almost half price! With its universal 1/4-inch screw thread, the PIXI Mini can be used as a stable platform for a wide array of devices including smartphones (using Manfrotto's KLYP clip) and cameras – from compacts right up to entry-level DSLRs. Plus, you can close the legs and use the PIXI Mini as a comfortable grip for shooting video.
UK dealView Deal

Save on this mini tripod that's designed to take DSLRs with zoom lenses up to 200mm. The adjustable two-section legs will easily cope with uneven shooting surfaces, while a screw clamp on the tripod head allows you to easily reposition the camera in portrait orientation. The PIXI EVO is made from aluminium, so it's sturdy and lightweight.
UK dealView Deal

This mini tripod is designed CSCs and, thanks to its universal clamp, smartphones. The Manfrotto Mini Tripod features a push-button locking mechanism for easy set-up, and it also converts into a comfortable handgrip for shooting videos. Intuitive to use and easy to carry, this mini tripod and clamp weighs just 222g.
UK dealView Deal

A must for every photographer's kit bag, and with this discount it's now even more compelling. The Manfrotto Super Clamp has a payload of up to 15kg and a fully ergonomic clamp lock to securely hold everything in place. It can also be paired with a whole range of accessories so if you've got a Super Clamp in your bag, you'll never be caught out for not having the right gear with you.
UK dealView Deal

Save on this quick release plate for speedy attachment and detachment of cameras and camcorders to and from your tripod head. With standard 1/4-inch and 3/8-inch screw attachments, this quick release plate can be tailored for your particular model of camera. Compact and lightweight, plate's rubber grip will allow you to stay in control when moving and setting the camera.
UK dealView Deal

This is a great saving on one of the best tripods in its price range. Manfrotto's 055 offers better-than-ever stability and, thanks to its horizontal column mechanism that can easily be extended, versatility. The quick power locks on the legs will keep the tripod stable at all times, and mean you can deploy or pack up the tripod in no time at all. Other features include a bubble level which rotates around the centre column, and an easy link connector for attaching photo or video accessories like lights or a reflector. The 055 aluminium 3-section tripod has a max height of 170cm and weighs 2.5kg. Tripod head not included.
UK dealView Deal

Save £20 on this essential product for adding a quick-release function to any monopod that doesn't have one. Manfrotto's 322 Quick Change Rectangular Plate Adaptor is universal, with 6.4mm and 9.5mm threads, and as it comes with a 200PL rectangular plate, you're ready to go right out of the box. Manufactured from durable aluminium, this adaptor is a flexible and practical addition to any monopod.
UK dealView Deal

Save a whopping £35 on the street price of this three-section aluminium tripod with enhanced features. The 190XPRO's centre column extends to quickly facilitate vertical or horizontal shooting, and the angle of the legs can be easily adjusted. Quick Power Lock levers on the legs make for speedy deployment, and boost stability. A bubble display built into the top of the centre column provides instant feedback on the tripod's level, and the easy link connector will support a range of photo and video accessories. The 190XPRO has a maximum height of 160cm, and weighs 2kg. Tripod head not included.
UK dealView Deal

Save £40 on this reliable and practical friction arm – a versatile product with a variety of applications, for example mounting lighting or even a camera, via the included bracket. Crafted from tough but lightweight aluminium for durability and strength, this friction arm can support up to 3kg and extends to 53cm. Through its secure locking system this arm provides variable friction – just adjust the ergonomic knob to get the desired position. The Variable Friction Arm features standard-size 6.4mm and 9.5mm screws, a 9.5mm thread and a 16mm stud and socket for extensive.
UK dealView Deal

Save £12 on this friction arm that has a variety of uses, including supporting studio lights – the arm extends to 53cm and can support up to 3kg. This product's secure locking system provides variable friction, and is easy to operate using the ergonomic knob. Featuring standard-size 6.4mm and 9.5mm screws, a 9.5mm thread and a 16mm stud and socket for extensive compatibility, the Variable Friction Arm slots into place with Manfrotto's very own 035 clamp. UK dealView Deal

These are the biggest savings on the superb Manfrotto tripods that you’ll find anywhere right now, so remember to act quickly to pick up a bargain.