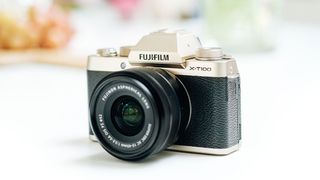 Cheap mirrorless cameras will still take excellent pictures, and it's one of the biggest secrets in the camera market – the longer a camera has been around, the cheaper it gets!

Some cameras are cheap because they’ve been built down to a price, but very often they’re cheap because a newer model has come along and the maker is keeping the old one on sale at a lower price, or the camera has such a good set of features there's been no need to upgrade or replace it for years.

The cheapest mirrorless cameras very have features and capabilities you just wouldn’t expect for this money. Just be aware that we show links to retailers offering all sorts of deals, but you need to pay attention to the lenses on offer. For each camera we recommend, we also advise the best lens to to get with it. However, different dealers may offer different options – and some may offer twin-lens kits which  are just out of this world for value.

So here’s our list of the 10 cheapest mirrorless cameras you can buy right now, and what we think of them, starting with the cheapest and working up. They include some of the best cameras for beginners, but you might also want to check out our guide to the all-round best mirrorless cameras  or, if you want to set your sights a little higher, the cheapest full frame cameras you can get right now.

Prices do fluctuate, and they do vary in different territories, so while we've tried to put the cheapest cameras at the top, things may change...

OK, so it’s not our favorite entry level camera, but it is really cheap

The EOS M100 is designed for beginners and smartphone upgraders, with super-simplified controls  that don’t even include a mode dial. This puts it at odds with every other mirrorless camera, and makes it a poor choice for anyone who wants to develop their skills with manual  controls and settings. It does have a very good 24-megapixel sensor, however, and you do get a tilting touch-screen display. Canon’s Dual Pixel CMOS autofocus system is very effective, and the 15-45mm kit lens usually sold with this camera has a retracting mechanism to make it more  compact for stowing away in a bag or a jacket pocket. The EOS M100 has been superseded by the EOS M200 further down our list, which helps because it makes it even cheaper to buy!

The X-A5 has been superseded by the X-A7, but we don't care

The Fujifilm X-A5 has just been superseded by the X-A7 – though the new camera is a lot more expensive, and already the X-A5 is being heavily discounted. This camera has beautiful retro styling and usually comes with Fujifilm’s new, compact 15-45mm power zoom lens. It’s more compact than Fujifilm's older 16-50mm kit lens and offers a slightly wider angle of view, too. The X-A5 does not have a viewfinder, but that’s a reflection of its price, and although it shoots 4K video, it’s only at a frame rate of 15fps, which doesn’t really count. If you want a cheap camera with a real splash of style, though, the X-A5 is still brilliant.

Another old, old camera that’s actually still rather good at this price

The Sony A5100 was launched way back in 2014, and was a beginner-orientated model even then, with no viewfinder and a 180-degree ‘selfie’ screen. But these have come back into fashion with vloggers, and while the A5100 doesn’t shoot 4K video, it can film in full HD, which is fine for most users. And, old as it is, the A5100 nevertheless has a 24-megapixel APS-C sensor, so it can match current cameras for resolution. This camera usually comes with Sony’s 16-50mm ‘pancake’ power zoom lens. The optical quality isn’t the best we’ve seen, but this is a very small lens, as is the camera itself, so if you’re looking for a pocket-sized camera, this could be ideal.

A rangefinder-style camera with in-body stabilisation and a tiny lens!

The GX80 uses a 16-megapixel Micro Four Thirds sensor which sounds a bit weedy compared to the beefier 24MP APS-C sensors used by rivals, but what you lose in sensor size and megapixels, you gain in other areas – notably the built in electronic viewfinder, in-body image stabilisation, 4K video and Panasonic’s ‘4K Photo’ mode, where you can capture 8-megapixel images at 30fps, or shoot first and focus later, using the ‘Post Focus’ mode. We especially like the retracting 12-32mm kit lens usually sold with this camera. Its slim profile makes the camera very pocketable when it’s not in use, and while the  effective focal range of 24-64mm isn’t as long as some, it’s an ideal lens for travel and street photography. Given the features you get with this camera, current prices are just plain silly. It's another cheap mirrorless camera that's actually rather good.

Every time the price goes down, the A6000 looks even better

The Sony A6000 was not launched as a cheap mirrorless camera, but as a top of the range APS-C model for serious photographers. Sony’s policy right now is to keep older models on sale, however, at prices that just get cheaper and cheaper and cheaper… The fact is that for stills photography, the A6000 range has not moved on that far, making the original A6000 a real steal. The A6300, A6500, A6400, A6100 and A6600 have better autofocus, better video and (probably) better high ISO image processing, but the fundamental camera has changed little (there, we’ve said it).  Unfortunately, getting the A6000 means getting the not-very-good Sony 16-50mm PZ lens too, but you can’t have everything.

The G7 was launched in 2015, so it’s a few years old now, and that shows in its styling and its specs. It’s the ideal choice for mirrorless camera buyers who prefer the heft and grippability of a DSLR style body, and it comes with a viewfinder, which is terrific in a mirrorless camera at this price. Bad points? The G7 was launched before Panasonic started including in-body stabilisation in its cameras, so you’re reliant on any optical stabilisation in the lenses. It also has a relatively old 16-megapixel Micro Four Thirds sensor, which knocks back the image quality ever so slightly compared to its APS-C sensor rivals. Prices vary a lot, so keep your eyes peeled – we have seen some crazy twin-lens deals on this camera.

It’s not the latest E-M10 model, but will you really notice?

Olympus is another maker that keeps older models on sale alongside newer ones, and given that the latest E-M10 Mark III is holding its price depressingly well, the older Mark II model shown here continues to be a cheaper mirrorless camera alternative. The sensor resolution is the same – both cameras use a 16-megapixel Micro Four Thirds sensor – and the camera design and handling is almost the same too. The key differences are that the Mark III has 4K video (the Mark II is Full HD) and a more advanced autofocus system (more AF points) plus a couple of new Art Filters, but is that enough to justify the price difference? We’re not so sure. This camera is cheapest with the older 14-42mm retracting kit lens, but ideally get it with the smaller 14-42mm 'EZ' lens if you can.

A bargain-priced camera that also happens to be brand new

The EOS M200 is essentially an evolution of the EOS M100, which we’ve already admitted we don’t like very much, but it is still a brand new mirrorless camera that’s amongst the ten cheapest mirrorless cameras you can buy. The key new features (compared to the EOS M100) are 4K video and improved autofocus, now with Eye AF. The standard kit lens is the 15-45mm retracting zoom, which is a good match for this camera and compact too. The EOS M200 might not appeal to enthusiasts, but its stripped back, super-simple approach could be just the ticket for smartphone upgraders who just want better pictures.

Fujifilm’s entry-level cameras like the X-A5 and X-A7 are a big hit with the Instagram/influencer audience and its high-end models like the X-T3, X-T30 and (soon) X-Pro3 are legendary among experts. In between, almost forgotten, is the X-T100, and it’s just not fair. The X-T100 is an excellent 24-megapixel DSLR-style mirrorless camera, usually sold with Fujifilm’s rather good XC 15-45mm lens, which is simple, neat and elegant and produces excellent images. Its 4K video ‘feature’ is a bit of a swizz, since it only captures at 15fps, but for stills photography (or full HD movies) the X-T100 is just brilliant. This is what old-school 35mm film SLRs used to feel like. The new X-T200 is a much better replacement, but as a cheap mirrorless camera to get started with, the older X-T100 is just great.

It's the third EOS M model on our list of the cheapest mirrorless cameras you can buy, and marks a shift in how Canon is pitching its mirrorless models. This camera is easy to use for beginners but has an electronic viewfinder (so that you're not just reliant on the rear screen for composing pictures) and is being offered at increasingly tempting prices. The EF-M 15-45mm f/3.5-6.3 IS STM kit lens has a retracting mechanism to make the camera smaller to carry around when it's not in use, and there is a small but handy selection of other EOS M lenses you can use with this camera. If travel is your thing and a couple of lenses is all you need, the EOS M50 is great. It's just a shame the 4K video mode can't be used with Canon's speedy Dual Pixel CMOS AF system (regular full HD video doesn't have this restriction). Even so, this is still one of the cheapest mirrorless cameras you can get right now.