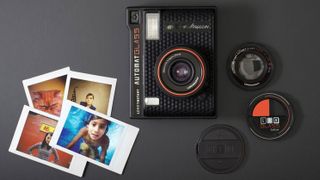 Lomography or ‘Lomo’ cameras are loved for bringing back the experimental joy of low cost, low-fi analog film photography, and encouraging us to find beauty in all its non-digital imperfections, but there's a bewildering variety to choose from!

Lomography cameras and their output are more about fun over fidelity, and happy accidents rather than photographic perfection and pin sharp detail. You never quite know what you’re going to get from a Lomo camera and either its 35mm or 120 roll film or instant film packs, until you look at the typically unique results. Some of the best film cameras available right now are made by Lomography (Lomography also makes some of the best films to use with them, too.)

That fact, as well as Lomography’s funky designs, lurid colour schemes and seemingly crazy (or ‘inspired’) conceptual ideas, is central to the brand’s appeal. We’re talking more ‘garage’ quality than gallery quality here. Yes, Lomo cameras are the punk rockers of the photographic world, seemingly kicking against the slick synth pop of the purely digital-biased, mainstream camera brands. They're easy to use, too, as most of them are simple point and shoot cameras.

Latterly, a handful of Lomography cameras have begun life as Kickstarter projects – so its social media channels are well worth keeping an eye on, as is the company’s own website, which regularly hosts re-issues and re-imaginings of existing, or previous models, in new designs, sometimes limited, or produced in collaboration with a particular artist.

It’s all about being part of a Lomo ‘community’, albeit one with a slight whiff of hipster-dom. Still, anything that brings a younger audience into a photographic medium that provides an alternative to thought-free smartphone snapping has to be welcomed and, with that thought, here are our recommendations for the best Lomography cameras you can buy right now in 2019. We display all the best prices from retailers across the globe, but if you have any trouble tracking down any of Lomography's more obscure cameras, lenses and other arcane accessories, you can also find them in the dedicated online Lomography Shop.

This crazy camera uses every inch of 35mm film… and then some!

At a penny shy of £60 at the time of writing, this is an appealing option for those looking to investigate the joys of shooting on film. The Sprocket Rocket from a few years back has just recently been updated in the Sprocket Rocket Red 2.0. As the memorable name suggests, the original Rocket has been given a bright new crimson red coat and now has more durable aluminium film advance knobs. But, as with its predecessor, the latest generation of the Sprocket Rocket has still been designed with one thing in mind: capturing the biggest photos possible on 35mm film with a sprocket-exposing frame and a panoramic perspective. Key features include 30mm focal length, aperture range between f/10.8 and f/16, a tripod mount and a hot shoe mount. Focus ranges from a ‘macro’ 0.6 metres to infinity, so plenty of potential here.

Using a Lomo camera doesn’t have to involve wondering where to get your film processed, as, capitalising on the success of Fuji’s Instax camera and film range, Lomography itself now offers instant camera alternatives. This option’s a close rival to Fuji’s Instax Wide 300, thanks to the wider format prints it outputs and the four AA batteries required for power. The viewfinder here is in a different location compared to its near Fujifilm doppelganger, but it’s still relatively bulky with limited controls. We do, however, get dedicated buttons for disabling the flash and adjusting exposure between +/- 1EV. The best results are to be had with the exposure dialled down and flash disabled. Complete with selfie mirror on the front and a large ridged lever for the shutter release, a lens ring allows for the focal distance to be dialled in between 0.6 metres and infinity. Bond ally ‘Q’ must have had a hand in the design here, as the lens cap houses a CR2025E lithium cell that allows it to double as a remote. Clever!

Brightly coloured plastic shells and features pared back to the minimum – meaning that all you really need to do (or can do) is point and shoot – all the hallmarks of a Lomo camera are present and correct here, including the fact that you need lighting conditions just right to be able to take a picture. That said, there’s now a version of the Diana F+ with the option to clip on a flash, which adds a degree of flexibility. Core features include three-position zone focusing, only one shutter speed (1/60 sec) plus apertures linked to lighting conditions, including pinhole, f/8, f/11, f/16. So, to a degree, it’s as much as case here of ‘point and hope’ as anything. While the core Diana F+ camera is very affordable, there is a boxed accessory kit for those who want to branch out and experiment even more. Don’t be too disappointed by the at times crude results you’ll get – the hit and miss nature is all part of the Lomography charm.

Another photographic curiosity from Lomography, this is a budget-feel snapshot camera with Russian origins and with the accent heavily on retro style. Again, this camera is proudly plastic in construction, despite it being one of the pricier Lomo devices on the company’s books and a modern reinterpretation of a 1970s/80s ‘classic’. All of Lomography’s cameras are aimed at those who like to physically engage with the photographic process and the Lubitel is no exception. Here we get manual aperture control (f/4.5-f22), plus manual shutter speed control (1/25-1/15 sec) and that’s about it. But, as with all the manufacturer’s output, it’s as much – if not more – about the charming imperfections of analog photography as being in pursuit of a perfect shot. Using this one is sure to provoke curious glances out in public.

For when you want to squeeze absolutely everything into your frame there’s this ultra wide option – that’s also commendably portably pocket friendly – for deriving that heavily vignetted, super saturated and inevitably slightly fuzzy Lomo look. The 17mm lens provided here goes wider than your standard kit lens and could be aptly described as ultra wide angle. And all from a camera that looks like it has been beamed in from the 1960s or 1970s. On this unit we get the relative luxury of automatic exposure too, with shutter speeds from 1/500 sec to infinity and an aperture range that stretches from f/4.5 to f/16. Users will need to invest in three LR44 batteries to be able to make use of this model, though that’s hardly a barrier to either purchase or creativity.

We’re used to Lomography’s analog cameras being very affordable, cheap even, but here’s one that is actually deliberately disposable. Happily, it lets you try out one of the company’s ISO400 black and white films into the bargain. Likewise convenient is the fact that Lomo also offers its own lab for processing, so you can send the camera back to have your shots developed rather than having to hunt around for someone to reproduce the results of your creative endeavors. While the camera itself may be affordable, if it gets you hooked on film photography that may prove more expensive in the long run. Especially when you’re paying for each and every shot you take.
• The best disposable cameras

Lomography’s Lomo’instant Automat, Leica’s Sofort and Fuji’s SQ6 are like peas in a particularly cosy pod, in terms of size, styling and placement of key features such as viewfinder and flash, plus the ability to use Instax Mini film. Lomo’s version is powered by two harder to find CR2 batteries rather than standard AAs and is, in typically quirky fashion, powered up with a twist of the lens barrel. Operation is point and shoot all the way via a 60mm lens, boasting an aperture of f/8, located front and centre. A lens ring allows photographers to dial in a focal distance between 60cm and infinity. Nothing is wasted here: the mirrored shutter release button is placed on the front, where it also facilitates the inevitable ‘selfies’. Once again on a Lomo camera, the optical viewfinder provided is tiny – so accurate framing is tricky. Whether you choose this one or its Leica or Fujifilm equivalents will come down to personal taste – and the budget you’re working with.

This camera may resemble something from the set of Chitty Chitty Bang Bang, but actually provides a serious option for those wanting to explore analog medium format film photography on the cheap – and panoramic medium format photography at that. There is the choice of three different aspect ratios here: the popular square format (6:6), a 6:9 option plus an extra wide 6:12 ratio. This is one of the attractive properties of using 120 roll film; it has a fixed 6cm height but allows camera manufacturers to choose all different types of funky frame widths to maximise the creative potential, as here. This folding camera is also one of the more attractively designed Lomography cameras too, it has to be said, though inevitably there’s a fair amount of plastic used in its construction, so don’t expect hand finished luxury akin to Leica. We do however get two lenses provided, and this does offer a very inexpensive route into medium format panoramic photography, so there’s plenty to recommend it.

Although to most intents and purposes it resembles and handles like to Lomography’s ‘regular’ Lomo’instant Automat, this ‘Glass’ version has received a rubberised makeover, which as well as making it look slightly retro futurist, on a practical note provides a surface for fingers and thumbs to get a good grip. We do indeed get different ‘glass’ here to its lookalike, however; a 38mm lens that provides an ultra wide-angle 21mm equivalent in 35mm terms (its maker claims that this is the first instant camera with a wide-angle glass lens) along with a brighter/faster f/4.5 maximum aperture. In theory we get a superior image quality to run-of-the-mill instant point and shoots, though with it’s hard to tell in fairness as the prints are no bigger than your library card or buss pass.

For just over £30, as the model name suggests, the appeal here is being able to build your own camera utilising the plastic kit shell provided. The upgraded version of the Konstruktor even comes with a PC socket for flash photography, though you’ll need the hot shoe adaptor in the optional accessory kit (another £17). However, we found there were a lot of plastic panels, parts, screws and springs to put together so this is one that will reward those with a degree of patience as well as constructing dexterity. Unsurprisingly, like the camera body itself, the lens here is plastic and we get another fixed focal length 50mm lens boasting an f/10 aperture. On a positive note we enjoyed using the waist level viewfinder and the through-the-lens viewing that comes courtesy of the spring loaded mirror level. Very Heath Robinson it may be, but it’s not without charm if you don’t mind putting the initial work in.