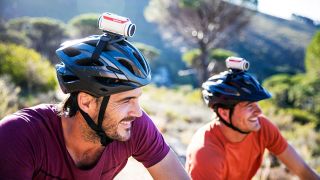 Welcome to Digital Camera World's guide to the best helmet cameras. There are a couple of main reasons you might want to add a video camera to a safety helmet. Firstly, they can be used for fun. For skiiers or mountain bikers (for example), helmet cameras offer a simple way to record footage from your outdoor pursuits, which you could then turn into an action video.

Secondly, if you regularly travel by bike or motorcyle, helmet cameras are good for giving you peace of mind. If the worst should happen and you end up in a collision, a recording could provide crucial proof to prevent you having to claim on your insurance, and even act as incriminating evidence for another driver or rider.

When it comes to buying a camera for your bike helmet, video quality and battery life should be your primary concerns. Of course, a higher resolution sensor and greater quality lens will make your video look better (and make the number plate of the car cutting you off easier to read). Finally, it's worth looking out for some form of video stabilisation, be it optical or digital. This will help make your bumpy footage much smoother – key for if you have to use the footage as evidence, but it’ll also make your YouTube videos look much better.

Extra features to look out for depend on what you're going to be using your helmet camera for. Some, like GoPros, fit into a huge range of accessories, so can be mounted to pretty much anything. Others come with integrated lights to help make you more visible on the road at night, with white front-facing and red rear-facing lights both available. Some even include GPS for adding locational data to your video footage.

Whatever you're using it for, we've got a device for you in this roundup of the best helmet cameras around.

The Virb Ultra 30 by Garmin is an action camera similar to the GoPro range. But the difference is how the camera can work in partnership with a range of other Garmin devices, such as heart rate monitors. That way, you can combine video, GPS location, elevation, speed and G-force captured by the camera with data like your heart rate tracked by a Garmin fitness wearable.

A waterproof case is included for use in bad weather, and a universal mounting system means you can attach the Garmin to almost anything, from your helmet to handlebars.

A three-axis image stabilisation system will ensure your video footage is super-smooth, no matter how bumpy the road is, and Ultra HD video at 30 frames per second provides detail and sharpness. This can be adjusted to 1080p Full HD at 120 fps, or 720p at slow-motion 240 fps.

Best all-rounder with a huge range of optional accessories

The gold-standard for an action camera, the GoPro Hero7 Black is arguably the best helmet camera on the market right now. Although it lacks bike-specific features like lights, the GoPro packs everything else you could want from such a camera, from Ultra HD video at 60fps, to voice control, a large touch screen, waterproofing, Wi-Fi, GPS, and the option to shoot in RAW.

This flagship Black model benefits from a removable battery (which the Hero7 White and Silver miss out on), and the company’s new HyperSmooth video stabilisation software, which promises ‘gimbal-like’ stability.

All that really lets the GoPro Hero7 Black down is its price compared to some alternatives, as you really need to ask yourself if the extra features and smoothness offered by this camera will be worthwhile. Also, battery life can be fairly short when recording at high quality; GoPro claims 45 to 50 minutes when shooting at Ultra HD and 60 fps, or a more healthy 85-90 minutes when lowered to 1080p HD and 60 fps.

A compact 4K action cam with a suite of sensors

Satellite navigation company TomTom now offers an action camera called the Bandit. This camera features a tough and waterproof design, a universal mounting system for attaching to helmets, handlebars and more, and a wide range of sensors. These include G-force, speed, rotation, acceleration, altitude, and of course GPS for your precise location.

What makes the TomTom Bandit unique is that it doesn’t require a cable to charge or transfer data. Instead, the camera’s ‘Batt-stick’ is a removable segment that contains the battery, microSD card, and a male USB connection, ready to plug straight into your computer to charge and transfer at the same time. There’s also Wi-Fi and Bluetooth for transferring your videos.

Battery life is a claimed three hours when shooting in 1080p HD, which is what you’ll want to do, because at 15 frames per second, the Bandit’s Ultra HD recording isn’t really up to scratch when it comes to high-speed biking. The Bandit can also snap 16-megapixel photos at a rate of up to 10 per second when burst mode is enabled.

This helmet camera offers the biggest bang for your buck

At several hundred dollars (or pounds) cheaper than the GoPro Hero7 Black, the Apeman Action Cam 4K seems too good to be true. But look at the spec sheet and you’ll realise this is a fully capable camera for your bike or helmet – it even comes with a mount for both in the box, as part of a 20-piece accessory bundle.

The camera also comes with two batteries, each claimed to last around 90 minutes, and a waterproof case which can be submerged to 30 metres. Ultra HD 4K video recording is limited to 25 frames per second, but 2.7K is a more respectable 30 fps and 1080p Full HD is up to 60 fps. The camera can also take 16-megapixel still images, and there’s a two-inch display on the back for reviewing footage.

The lens is impressively wide at 170 degrees, and there’s an HDMI out port for connecting directly to a TV or monitor.

The best helmet camera if you're after a quality GoPro alternative

Drone maker DJI is a relative newcomer to the action and bike camera market, but has caused a stir with its first direct rival to GoPro: the Osmo Action. What sets this camera apart is its front display, which is useful for setting up selfies but perhaps less useful when mounted to your helmet or handlebars. But in better news for bikers, the camera’s RockSteady image stabilisation is a match for GoPro’s own software, and HDR will help pick out details from the shadows on bright days.

There’s voice control, which is handy when it’s tricky to operate the camera while riding (and with gloves on), and water resistance to 11 metres, so if you get caught in a downpour it won't cause an issue. DJI has sensibly opted to match the Osmo Action mounting system to those found on GoPro cameras, so any existing mounts and accessories you have should work fine.

The only downside here is a lack of GPS, which could be a problem if you need to know the exact location a piece of video was recorded.

Best for Ultra HD video on a sensible budget

For 4K on a budget, the Yi action camera is a good option. It shoots Ultra HD at 30 frames per second and uses a high-quality Sony image sensor with a 155-degree wide-angle lens, ensuring a good view of your surroundings.

The battery is claimed to last two hours when shooting in Ultra HD, which is about the same length of time you can fit on a 64GB memory card (as a side note, most cameras like these do not come with SD cards, so you’ll have to provide your own – take a look at our memory card guide).

The camera has both Bluetooth and Wi-Fi for connecting to your smartphone and viewing footage on the companion app, then sharing video on social media. The YI Action App also features some simple video editing tools, filters, and options for adding music to your recordings.

The GoPro Fusion offers something unique by using two lenses and image sensors to create a 360-degree video, automatically stitched together by the camera itself and ready to view as soon as you transfer it to your computer or the GoPro phone app. You can then extract a traditionally-framed video from any part of the 360-degree recording. There is a range of movie-style edits and shooting modes to pick from if you want to get a little more creative.

It may seem like overkill, but we reckon shooting 360-degree video from the top of your bike or cycle helmet makes complete sense. After all, it’s all well and good having a forward-facing camera, but what if someone drives into you from behind?

Voice control, image stabilisation, and compatibility with a huge range of GoPro mounts, cases and accessories completes the package.

Best for cyclists looking for a handlebar camera and light

Instead of being a generic action camera like a GoPro, the Cycliq Fly12 CE is purpose-built for mounting on your handlebars and using as a headlight and dash cam. This camera has a bright and dimmable 600 lumens light for improved nighttime road safety, along with a Full HD camera recording through a 135-degree lens.

Like a car dash cam, the Cycliq automatically saves and protects a segment of footage if an accident is detected, and there is a six-axis image stabilisation system. The battery is claimed to last for eight hours on a charge, which should be plenty for even the longest bike ride.

There is no integrated GPS or Wi-Fi, and no display either, although Bluetooth is present, and it's compatible with the Strava cycling app. Also like a dash cam, the camera records video in segments and starts overwriting the oldest once the memory card gets full.

If you’re looking at the front-facing Fly12 from Cycliq, then you’ll probably want this rear-facing camera too. Just like the Fly 12, this Fly6 comes with an integrated light, only this time a rear-facing red light limited to a dazzle-preventing 100 lumens.

The camera shoots at 1080p Full HD at up to 60 frames per second, and offers the same six-axis image stabilisation system as on the Fly12. Bluetooth is the only connectivity option, but this does allow for Strava integration.

Cycliq says the Fly6 is water and dust/dirt resistant, and it charges via a high-speed USB-C connection. The battery life is a claimed seven hours, and the camera is designed to attach go your seat post.

A tough, go-anywhere camera for the off-road biker

The clue is in the name for this camera – the Olympus Tough TG Tracker is strongly built and could be perfect for downhill mountain bikers. It records in 4K Ultra HD at 30 frames per second, and at twice that speed at 1080p Full HD.

But the main draw here is toughness, and to that end the Olympus can withstand being dunked 30 metres into water, or being subjected to 100kg of crush force. It will also shrug off temperatures of -10C, and is shockproof when dropped from a height of up to 2.1 metres.

The lens is among the widest we have ever seen on this type of product; at 204 degrees, it should give a clear shot of what’s going on to the sides of your bike, as well as straight ahead. There’s also a pop-out 1.5-inch display for adjusting settings and reviewing footage, and you can be sure of a stable video thanks to a fix-axis stabilisation system.

The only downside here is the light, which looks like it could be used as a bike headlight, but is intended for intermittent use only. Olympus says it can only be used for a maximum of one minute at a time, which is a bit of a disappointment for an otherwise fully-fledged camera.