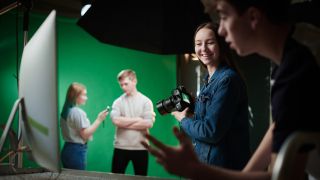 Looking a great camera to use on a media course or at film school? We have rounded up a selection of options for the best camera for film students in 2020.

Today, there is no need to spend a fortune on film making kit. Why invest in a high-end cinema camera costing thousands when an interchangeable lens digital stills camera which conveniently also shoots video can do a very impressive job for, while not exactly peanuts, a fraction of the cost?

With autofocus performance consistently being improved with successive generations of interchangeable lens cameras, plus a large digital imaging sensor and super powerful processor at their heart, the latest cameras routinely shoot 4K, with many offering the ability to add an external microphone for more professional sounding audio. As any filmmaker knows, poor sound can scupper a project no matter how impressive the visuals.

Fortunately though, up and coming filmmakers have fewer barriers to top tier creativity than ever before. Thanks to keen pricing and competitive offerings, today’s budding student filmmakers can grab a DSLR or mirrorless camera, start shooting their ‘Hollywood’ epics straight away – and get great results with it.

With the above in mind then, which cameras currently give the best bang for media or film students’ bucks?

The best camera for film students

A classic choice for the serious filmmaker and film student

$1,269
View at Amazon
$1,297.99
View at BHPhoto
$1,299.99
View at Best Buy
See all prices (106 found)
151 Amazon customer reviews
☆☆☆☆☆
A filmmakers' favorite
Impressive video specification
Snappy and responsive in operation
ISO range could be broader still
Now three years old, so not the newest model out there

Panasonic has long sold its mirrorless cameras as hybrid stills and video shooters, making this early 4K capturing example one of its more popular for budget conscious filmmakers. While the camera impressively offers 4096x2160 pixels Cinema 4K footage at up to 60fps, or can dial it down to Full HD if you want to save space on the memory card, it’s also possible to extract 18MP stills from 4K resolution footage shot at 30fps. Handily, the camera is weather sealed too, making it an option for all shooting scenarios, while further pluses include dual SD card slots with UHS-II support, plus a full sized HDMI Type A terminal output. It goes without saying that filmmakers also have access to a wide range of existing Micro Four Thirds lenses and accessories in support, making the GH5 a sensible starting point for fledgling filmmakers.

Superb film-making camera (if you don't need to shoot stills)

A version of the Panasonic GH5 that has been tweaked for filmmaking, at the expense of some of its still shooting capabalities. It offers ‘just’ 10 megapixels – and thus even more dedicated to the art of filmmaking, and particularly so in lowlight. Here we get not just regular 16:9 ratio 4K footage and the option of Cinema 4K at the slightly wider 17:9 ratio, along with twin UHS-II card slots to cope with the data hungry demand; we are also gifted Dual Native ISO. The latter is a feature borrowed from its maker’s pro video cams that claims to deliver less noise at higher sensitivities – thereby making the camera a more proficient tool when recording in lower light. Naturally, this being Panasonic, 8MP stills can be snatched from a 4K video sequence, and, unlike regular stills cameras, video recording duration doesn’t cut off at just shy of 30 minutes. With far too many nuanced video features to go into here, check out our standalone long form review of the GH5S for the fuller picture.

Designed for filmmakers from the get go, the (deep breath) Blackmagic Pocket Cinema Camera 4K isn’t an option to consider if you’re looking to shoot stills as well. For this chunky retro looking device is based around a Micro Four Thirds lens mount and Four Thirds sensor combo while being heads and shoulders above actual Four Thirds stills cameras when it comes to video capability. It benefits from a huge 5-inch LCD, lots of on-board connectivity, dual card slots and dual native ISO; the latter meaning that this Blackmagic option actually delivers low noise 4K video recording more impressively than some full frame sensor cameras, which is a high recommendation. If it’s video you want pure and simple, you could even say it’s ‘magic’.

Described by us as one of the best beginner-targeted interchangeable lens cameras ever, we get the ability here to shoot 4K video coupled up with Canon’s latest Digic 8 processor. A further bonus is Live View autofocus utilising Dual Pixel sensor technology, thereby ensuring a swifter response than the contrast AF used by many competing models’ sensors when placed in Live View mode. For composing and reviewing videos, the DSLR’s flip out and twist LCD screen adds creative flexibility; but there are some limitations. For example when switching from Full HD video to 4K shooting there’s a significant crop factor, which effectively narrows the lens’ angle of view, meaning you may need to step back and re-frame your shot. Focusing in video mode isn’t instantaneous either; but it is at least smooth and silent, avoiding jerky transitions between subjects. While not 100% perfect, then, this is still a decent option for fledgling filmmakers looking to cut their teeth.

While this compact, solid-feel Sony may not offer 60/50P 4K capture like a couple of its rivals, it does utilise full pixel readout, capturing oversampled 6K data and then down sampling it to 3,840x 2160 pixels UHD resolution. It also offers clean HDMI output to external recorders, while claiming to offer the world’s fastest AF acquisition time of 0.02 seconds. The above is undoubtedly what sets this camera apart and makes it worthy of investigation by those looking to get into shooting 4K video on a budget, as apart from the features mentioned the A6400 is rather conventional. It has to be said though, the fact that the magnesium alloy body is dust and moisture resistant will aid filmmakers looking for a camera that won’t let them down, while once again a tilting rear LCD screen offers up flexibility to filmmakers looking to get creative – student or otherwise.

Crammed full of technology that has trickled down from its Nikon Z 6 and Z 7 bigger brothers, the Z 50 has the advantage of capturing 4K across the entirety of its sensor width, rather than a cropped version that some of its rivals have employed. On top of this, 4K time-lapse sequences can be created in camera, while shooting in Full HD adds additional slow motion footage. Digital image stabilization is provided in video mode only, plus a tilting one million dot touchscreen flips through 180° to face the person in front of the lens. This obviously makes the Z 50 particularly useful for vloggers, not just film students looking to buy the best capture device they can for their budget.

Read more
The best cameras for filmmaking in 2020