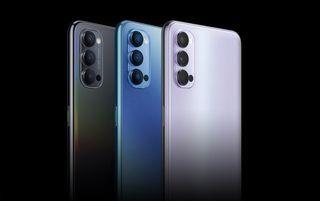 UPDATE 08/06: The Oppo Reno4 and Oppo Reno4 Pro have both been officially launched – and they come complete with some exciting specs, including OLED displays, triple camera units and Snapdragon 765G SoCs. The Oppo Reno4 base model has a 6.4" screen with a dual punch-hole cutout for a 32MP selfie camera and a 2MP time-of-flight camera. On the rear of the phone it has a 48MP main camera, an 8MP ultra-wide camera and a second 2MP time-of-flight camera.

Meanwhile, the Oppo Reno4 Pro has a 6.5" screen with a 90Hz refresh rate that has a single punch hole cutout for the sole 32MP selfie camera. The Pro model boosts the megapixel power of the ultrawide camera to 12MP and replaces the time-of-flight camera with a 13MP telephoto module that's capable of 5x hybrid optical zoom and 20x digital zoom.

In addition, there's also a handy specs comparison table that helps us differentiate between the two models. One of the most obvious differences concerns the selfie camera unit. The Oppo Reno4 has a dual camera setup, with a 32MP main camera and a 2MP secondary camera. However, the Oppo Reno4 Pro only has a single 32MP camera on the front.

The Oppo Reno4 series has been expected for a while, but it appears that the phones might finally be looming on the horizon. New rumors have suggested that we'll see two new Oppo Reno4 camera phones launched next Friday, on 5 June. Just as the previous Oppo Reno3 generation, the Oppo Reno4 phones will arrive with 5G connectivity.

The specifications for the Oppo Reno4 series have already been previously leaked. These phones will include Snapdragon 765 chipsets and triple camera units mounted in the back of the handset. One of the main distinctions between the two phones seems to regard the front-facing camera.

Apparently, one of the phones (presumably the higher end one) will have a dual 32MP and 2MP selfie camera unit, while the other will have a single 32MP camera. The 2MP camera is likely to be a time-of-flight camera, which is used to create shallow depth-of-field effects in Portrait mode.

Another piece of exciting news regarding the Oppo Reno4 series cameras is that the lineup will also include the 'Super Night Mode' for improved shooting after dark. In addition, the triple camera unit on the back will consist of a main 48MP f/1.7 camera, an 8MP f/2.2 ultra wide camera and a 2MP f/2.2 time-of-flight camera.

According to phone news website GSMArena, the Oppo Reno4 handsets will also have 65W fast charging, punch-hole screens with curved sides and 8GB of RAM. There will be two memory options of either 128GB or 256GB.