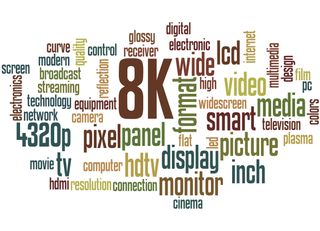 It's been called everything from 'super hi-vision' and 'hyperrealism to 'perfect reality' and 'immersive TV', but what is 8K?

From being touted by TV makers and cutting-edge Hollywood blockbusters, 8K is now a reality in the camera sphere. We've got the imminent Canon EOS R5 about to deliver uncropped, full-frame, 10-bit internal 8K raw, and the Sharp 8K Video Camera bringing the smallest 8K body to the marketplace.

Even some of the best camera phones now boast 8K video, such as the Samsung Galaxy S20 Ultra, so 8K is no longer a pipe dream. It offers quadruple the resolution of 4K video, so even though the best 4K cameras boast an impressive 3840 x 2160 UHD resolution (some going slightly higher, with Cinema 4K modes) 8K really is a whole new ballpark.

It's still early days for 8K, and for now most people are happy with 4K, but momentum is building – YouTube and Vimeo both support 8K video, for instance – so image-makers need to be ready.

Created in the early years of this century by Japan's state broadcaster NHK (when it was called Super Hi-Vision), 8K is a technology that’s been waiting its turn for a long time. It got its name from meaning anything with a width of 8,000 pixels, though recent international broadcast standards now define 8K resolution as meaning exactly 7680 x 4320 pixels. What that means is an image that’s about four times bigger than 4K.

Though initially it was only possible to view 8K video using a rack of two aligned 4K projectors, 8K TVs are now available from a number of mainstream brands, including Sharp and Samsung (which, as noted above, have already given us 8K camera units) as well as Sony (whose upcoming video-oriented camera, the Sony A7S III, is not expected to be 8K-capable).

In addition, manufacturers such as Dell that are known for producing the best 4K monitors for video editing are now offering 8K displays to handle the new generation of footage.

How much better is 8K than current video/TV?

Technically speaking, 8K is four times better than 4K, and 16 times better than 1080p / FullHD, but a better way for photographers to understand 8K is in terms of megapixels. While a 4K image, which is defined as 3840 x 2160 pixels, equates to a 8.29 megapixel image, 8K creates a 33.17 megapixel image. NHK insists that 22.2-channel surround sound is part of the 8K format, too, though none of the early 8K products include anything like that.

Put 8K in pure megapixel terms and your perception of 8K should instantly change. Is 8K a pointlessly futuristic technology? Or one that’s inevitable, and much-needed for filmmakers, TV producers, videographers and photographers to better capture and convey reality?

Make no mistake about it; 8K is big, big news for photographers and videographers alike. And when you consider buying into a camera system, whether it's an 8K-capable body or high-definition lenses that can resolve a sufficient amount of detail, it's an important consideration when investing in future-proof new kit.

Will I notice a difference?

Yes, because 8K is about pixel density. For video, it's quite a jump – from a viewer's perspective, to get the same pixel density as a 32-inch FullHD TV you would need a 120-inch 8K TV or PC monitor.

However, it's how close you sit to an 8K TV that determines whether you see the extra detail or not. In short, the closer you sit, the more detail you see. If you get a chance to see an 8K TV in action, perhaps in a flagship electronics store, go right up to the screen and see if you can make out the pixel grid in the panel itself.

Closely examine an 8K panel, then do the same with a 4K panel, and then ask yourself this: can you foresee an Apple 8K Retina iMac not being a hit with photographers and videographers?

What are the advantages of 8K?

With consumer-grade 8K cameras like the Canon EOS R5 already a reality, it's going to change some key photography techniques. For instance, wildlife photographers regularly employ a hit-and-miss ‘machine-gun’ technique when they spot their target animal, taking as many frames per second as they possibly can. Ditto sports photographers.

Since still images from an 8K video are 33 megapixels, it will become possible to just film the animal, or the athlete, in 8K and then grab a high-resolution still frame later. That already happens in some so-called ‘4K cameras’, so it’s probably an inevitable evolution for all kinds of photography.

For the broadcast TV industry, 8K production will be an upgrade on the same 'over-capture' versatility that 4K has brought. For the last few years, sports broadcasters have been filming with 4K cameras purely to enhance their HD channels. For example, directors can zoom in on 4K footage by up to four times without losing any resolution for a HD broadcast, creating their own close-ups and essentially saving money on using a dedicated close-up camera.

This kind of reframing and zooming into images will only increase with the advent of 8K, especially when 4K broadcasts properly kick-off.

What are the disadvantages of 8K?

Although 8K products are beginning to go on sale, it's far from a finished format. One of the main issues is frame-rate, which is expressed as frames per second (fps). That describes how many still images are flashed on the screen per second; the higher the number, the smoother the video will look.

The latest generation of high-end 4K cameras are only just capable of capturing 120fps, but 60fps is the norm for most. So what about 8K? For now, 8K TVs can only manage 60fps, and the Canon EOS R5 records up to 30fps. Many believe that, for the format to truly impress on motion sharpness, it will have to jump to 120fps in order to achieve true slow-motion video. After all, a blurry high resolution image makes the extra detail invisible.

However, 8K 120fps takes a magnitude more processing power than 4K, and that is going to put a lot of pressure on production, network and especially storage infrastructures for broadcasters. Another challenge is bandwidth, which will require new kinds of compression formats; file sizes will have to be drastically reduced while retaining their pixel depth.

Are you excited about 8K? You should be – it's going to change the way we compose, edit and re-package both photographs and video, and it could massively boost VR video as well.

There's still a lot of work to be done behind the scenes to make 8K a reality, particularly as a practical broadcast TV standard. However, 4K TV broadcasts are still in their infancy, and 8K TV sales are not expected to become significant for at least another few years, so the entire industry has plenty of time to adjust to 8K and its massive bandwidth requirements.

Either way, the race for more and more megapixels is far from over – and you can get on board with the technology early, and start future-proofing yourself now.

Hands on: Canon EOS R5 review
Watch out, Canon – the thunder-stealing Sharp 8K Video Camera is back
The best 4K camera for filmmaking