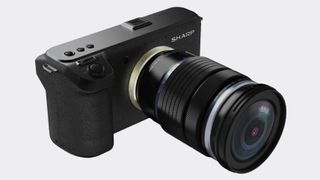 The much anticipated Sharp 8K Video Camera is one step closer to its "second half 2020" release, as it has just made its first appearance on the Sharp website.

The Sharp 8K Camera was the first ever consumer 8K body to be revealed by a manufacturer, but it looks like the Canon EOS R5 will beat it to market. Still, with Sharp's product poised for release later this year, it's clear that the two cameras will be battling head-to-head for customers' cash.

So what do we know about Sharp's camera? The manufacturer has yet to actually put anything on paper, as until this point the product has only ever appeared at trade shows like CES, where it was always a darling among the vlogging and videography crowd.

The latest development has simply seen Sharp add the camera – described as the "world's smallest interchangeable lens 8K video camera" – to its page listing all its 8K products (including monitors, TVs, camcorders and hard drives).

As such, all that we officially know about the camera comes from what Sharp's technical spokesperson Cliff Quiroga has revealed in interviews. Photo Rumors has helpfully collated the expected specs:

• 8k at 30 fps in H.265 codec (Sharp is working on 60 fps)
• 4k or HD up to 60p at 200 Mbits/s at 10-bit
• UI fully implemented
• Micro Four Thirds lens mount
• CMOS sensor (no sensor info besides Micro Four Thirds format)
• Mini-XLR input
• Full HDMI out
• Headphone and audio jacks
• One SD memory card
• 5.5" fully articulating touchscreen HD LCD (swivel)
• Release timeframe: second half of 2020 for Japan, US shortly after
• Price under $5,000 (update: priced between $2,800 - $3,700)
• 1 SD card slot
• Ultra-compact BMC design
• Looks like the Blackmagic Pocket camera
• Red could be involved with this camera (Foxconn and Sharp were considering to invest in Red to develop an affordable 8K camera)

We heard last year that the Sharp 8K Video Camera will feature a 33MP Micro Four Thirds sensor in a new 16:9 ratio – a completely new sensor design by Sharp, unlike anything seen in Olympus and Panasonic cameras (which feature 4:3 sensors that max out at 20.1MP).

Clearly the Canon EOS R5 outguns it in many tech respects, with a rumored 44MP sensor, dual memory card slots and up to 120fps shooting. The Sharp model will have the advantage in size, though, both in terms of its smaller footprint and its massive 5.5-inch rear screen.

And if it really does sell for somewhere between $2,800-$3,700, Sharp could be set to give Canon a real run for its money on the new 8K battlefield.