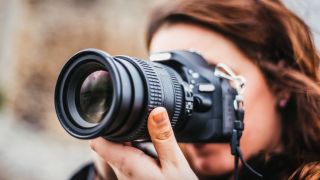 If you thought that the best camera under £500 would be a poor-quality piece of plastic junk, then think again! The best camera is not always the most expensive, and many of the major manufacturers have made a point of filling out the entry-level ends of their offerings with lots of high-quality devices that offer a sophisticated imaging experience. This is especially true given all the best cheap camera deals we're seeing at the moment.

So what does a budget of £500 actually get you? With this much to spend, you can expect to find a fairly advanced compact camera, an enthusiast-focused mirrorless model, or an upper-entry-level DSLR. We've set this price as a rough benchmark because prices are changing all the time, so now and again you might find a camera in our list that creeps a little way over that – or plunges way below! – but we will definitely get you in the right ballpark.

Here's our pick of the best cameras under £500…

An impressively specced beginner's DSLR and one of the long-awaited successors to the entry-level EOS 1000D, the Canon EOS 2000D is a great choice for any stating-out or aspiring photographer looking to try out their first DSLR. It doesn't do anything particularly flash but does manage everything you need it to: a 9-point autofocus system, 3fps burst shooting, Full HD video, and of course, the EF-S mount that gives the user access to a huge catalogue of fantastic lenses. Friendly to the novice user, but offering room to grow, the EOS 2000D represents a fantastic bargain.

Canon has spent some time filling out the low end of its DSLR range recently, creating lots of compelling options for beginner users and those working to tight budgets. One of the most affordable options is the EOS 4000D, which comes at an even lower price point than the EOS 2000D seen above. It's a stripped-back beginner's DSLR that does just about everything you need it to for an incredible price, kit lens included. It's nothing terribly sophisticated, but for the money you get a decent camera with 18MP of resolution and 3fps burst shooting, as well as access to Canon's incredible stable of lenses.

Incredible value for money, with or without its smart little 12-32mm kit zoom lens, the Panasonic Lumix GX80 shoehorns a host of high-tech features into its diminutive, compact-style build. The best deals however are for a twin-zoom kit, that offers a 45-150mm telephoto in addition to the 12-35mm standard lens. Standout features include 5-axis image stabilization, Light Speed AF, Post Focus and 4K ultra-high definition for both video and rapid-fire stills, as featured in Panasonic’s top-end cameras. There’s also a high-res electronic viewfinder built into the back of the camera, along with a tilting touchscreen. If you want a camera that goes large on features and performance, but with a small build and price tag, this is amazing value for money that will leave you with cash to spare.

Sony’s excellent A6400 and A6600 might be out of budget, but the A6000 is a highly capable alternative. In fact, the company claims it's its best-selling mirrorless camera to date. While it might lack its elder siblings’ 4K video option, you get plenty of features you’d never expect to see on a similarly priced DSLR. These include a mammoth 179 phase-detect AF points that make subject tracking a doddle, together with 11fps burst shooting. That combination alone should make the camera appeal strongly to sports and action shooters, while the tilting LCD screen, 2.36million-dot OLED viewfinder, built-in Wi-Fi and NFC only sweeten the deal further.

This big-sensor compact handles like a classic film camera

While most enthusiast compacts are happy enough with a 1in-type sensor, the Panasonic LX100 shoehorns in a larger Micro Four Thirds sensor into a body that's only slightly larger than the average enthusiast compact. In fact, it’s the only compact camera to have such a sensor, and this helps it to deliver excellent image quality. You might find the focal range of the 24-75mm lens to be a little limiting, but with a maximum aperture of f/1.7-2.8 it’s nice and bright. Add to that 4K video, an integrated viewfinder and Wi-Fi with NFC, and it still stacks up well against more recent offerings. Once again, too, the release of a more expensive successor (the LX100 II) has served to drive the price down and make this extremely capable camera an even more tempting prospect.

The original Cyber-shot RX100 was a landmark release, with its large 1in sensor, masses of functionality and tiny body upping the standard for a compact that you can still get into your pocket. This third iteration has a 20.1-megapixel sensor and a fast f/1.8-2.8 3x zoom lens equivalent to 24-70mm in full frame terms. It even packs in a pop-up electronic viewfinder. Sony has since announced RX100 models up to the VII, many of which offer competitive features like a longer zoom range, but we reckon the RX100 III still hits the sweet spot for power versus price.

Pocketable compact camera with 1in sensors are desirable for the quality of their images, but these rarely offer lenses that exceed 100mm or so. The only exception to this is Panasonic’s Lumix TZ100, which partners its 20MP 1in sensor with a surprisingly long 25-250mm f/2.8-5.9 optic. True, in order to accommodate this it’s a little bulkier than the average compact, and not all that bright at its telephoto end, but if size and telephoto reach are your priorities then you’ll be hard pushed finding something more suitable. And that’s only the start; with a small electronic viewfinder, 4K video recording, Raw shooting and a five-axis OIS system to help keep images sharp and videos stable, it’s got masses going for it aside from its headline specs. Plus, with the TZ200 out now, its price has dropped even further!