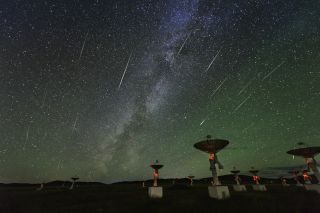 The Perseid meteor shower will reach its peak on the 12 and 13 August 2019. Although technically the most prolific meteor shower of the year is the Geminids in December, when it's possible to see up to 120 shooting stars per hour, the most reliable is the Perseids meteor shower each August.

With the moon being bright and almost full, the 2019 Perseids may not be quite as spectacular in some years – but even in the moonlight the meteors will still be visible - and there are still opportunities for taking pictures just before dawn when the moon has set.

Of course, with the right astrophotography tools it's possible to photograph shooting stars on any night of the year. But meteor showers like the Perseids bring incredibly high activity – and lots of opportunity for stunning night sky photography. So what is the Perseid meteor shower? And why does it happen?

Well, it's called 'the Perseids' because the meteors seem to originate from the constellation of Perseus. The Perseids occur when the nights are reliably warm and the skies are more likely to be clear. In 2018, there was another bonus, and that was moonlight – or, specifically, a lack of it. Photographing shooting stars last August, therefore, was relatively straightforward for many.

What is a shooting star? Essentially, it's just dust. Earth’s orbit of the Sun often takes it through stacks of debris left in the solar system by comets and asteroids. Mostly it's just dust particles – no bigger than grains of sand – that Earth's atmosphere slams into. As it does, these particles energise briefly and become disintegrating meteors. If you're standing on the night side of Earth in complete darkness, you'll see a shooting star. The pile of particles that cause the Perseids come from Comet Swift-Tuttle, which last passed through the solar system in 1992 on its 133-year orbit of the Sun.

Read more: How and when to photograph the moon

The trouble is, a shooting star only typically lasts a split-second – though occasionally as long as a second – as it streaks across the night sky. That doesn't give you enough time to react to it, so your camera's shutter needs to be already open, ready, and waiting for the light from a shooting star to hit its image sensor.

What's so special about the Perseids?

An annual highlight of the astrophotography calendar, the Perseids meteor shower can rain down well over 50 meteors per hour, sometimes as many as 200. If the moon is out of the way, it can be a stunning experience. Called the Tears of St. Lawrence by Catholics because of its timing near a saint’s day, its meteors can often leave a bright trail behind them.

Although the Perseids meteor shower officially take place between 17 July and 24 August, the peak nights, when activity is expected to be at its highest, occurs between 9-14 August 2019. The exact dates change every year.

When and where to see the Perseids in 2019

Plan on camping out. Clear skies allowing, your camera needs to be pointing at the night sky is just before dawn on 12 August, and again at the same time on 13 August; the moon would have set before then, so that if the skies are clear you have the best chance of seeing (and photographing) this astronomical event. If, however, those dates don't fit with your schedule, it’s worth looking for meteors on the nights before and after.

Picking a site with little light pollution is important because you’re going to be opening the shutter for at least 25 seconds, so a lot of light is going to get in. This interactive world light pollution map and the Dark Site Finder are both very useful for scouting a good location away from the bright lights of urban areas. However, if you can't travel outside a city, you can still try to photograph shooting stars. Find somewhere where no streetlights are going to interfere with your composition, and get your camera into the shadow of a building.

Our best astrophotography tools buying guide has you covered for all the gear you'll need to photograph the Perseids this year. However, here's a quick overview for the key kit you'll need...

You can use any DSLR or mirrorless camera as long as it has a manual mode, and you can shoot long exposure images for at least 30 seconds. However, a camera with a full-frame sensor is the best option because it will capture more light and feature less image noise when used at high ISOs.

Since you want to capture as much of the night sky as possible to maximise your chance of capturing shooting stars, a wide-angle lens is best. Somewhere between an effective focal length of 28mm and 10mm is ideal.

Keeping your camera steady is an absolute must for this long exposure project, so you'll need the best tripod you can get. If it's windy, don't use the tripod's extension arm. Check that the horizon is level before taking a shot.

A shutter release cable that can be locked, or an intervalometer or remote control, will be helpful for taking repeated long exposures without having to manually depress the shutter button every 25 seconds.

Even summer nights can get cold after midnight, especially if you're stationary while your camera does its work, so also take a coat and a fold-up chair.

Where to point the camera: the radiant

How important is this to point your camera at? That depends on your composition. Since the shooting stars will appear to come from here, pointing at Perseus can get you an impression of movement. However, you're then restricted to meteors that occur near that radiant point.

Where to point the camera: composition

Although it's tempting to point your camera at the radiant, meteors can just as easily appear anywhere in the sky.

By pointing at the radiant you'll likely miss as many meteors as you'll catch, so it's better to get something interesting in the foreground – perhaps an old barn, a tree, or a sculpture – in your composition to add interest. That way you'll have a beautiful astro-landscape photo that, hopefully, will feature a shooting star or two.

Besides, the Milky Way will be visible in the south-eastern sky during August, if you're in a dark sky site, that is. You might rate that as a tempting backdrop for a shooting star.

With your lens's focus set to infinity, and its aperture to around f/2.8 (or as open as possible), choose ISO 800 or ISO 1600 (or even higher if you're in a really dark sky site) and fix the shutter speed to 25sec. Take the shot, and if you're not happy with result as a stand-alone image, make adjustments and re-take.

Once you're happy, here comes the fun bit; take the same shot 50-200 times in Raw over the course of an hour, or a couple of hours. Just be careful not to switch-on any lights, or nudge your tripod during the shooting period; keep dark and stand well back.

Either way, you'll end up with hundred of shots of the night sky, some of which will hopefully have shooting stars within. If that's all you're after, you can extract the images that do feature a shooting star (or perhaps even two), and ditch the rest. However, if you use the free software StarStaX, you can drag-and-drop all 200 photos into it to create a star-trail image … featuring shooting stars, of course. It's also possible to this on Adobe Photoshop.

When is the next meteor shower?

Although the Perseids is the most reliable, and most easily photographed meteor shower of the year because it occurs during summer in the northern hemisphere, there are other nights during the year where you are just as likely to see some shooting stars.

The Geminids this year will peak on the night on December 13 - but during a full moon, so are probably worth missing this year.  Another usually good one is the Eta Aquarids, caused by the leftovers of Halley's Comet, which will peak in a moonless sky during the night of 5-6 May 2020 - but again, unfortunately the moon will be full.