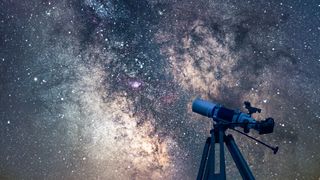 Welcome to our guide to the best telescopes for astrophotography. There are plenty of great telescopes available to today’s amateur astronomer, but if you're thinking of trying your hand at taking taking pictures of what you see in the night sky (aka astrophotography), figuring out the right tools for the task can be trickier.

When choosing a telescope for astrophotography, one of the most important things to look out for is a motorized mount that tracks the motion of the sky. The Earth’s rotation means celestial objects appear to slowly progress across the sky from east to west, at roughly the apparent diameter of the full moon, every two minutes.

If you use a telescopes that doesn't have a motorized mount, objects will appear to drift out of the field of view of the telescope, and you'll constantly have to manually re-centre the target object. This means you’ll be limited to shooting short-exposure photos of the Sun, Moon and planets. A telescope with a motorised mount that tracks the sky means you'll also be able to try your hand at long-exposure astrophotography.

You'll also want to consider the aperture of the telescope, and the kind of astrophotography you want to do. The larger a telescope's aperture, the more light it collects and the finer detail it can resolve. In general it is not worth considering a telescope with an aperture smaller than 75mm

Some telescopes are also better suited to certain types of astrophotography than others. Certain designs require a great deal more setup and calibration than others – an especially important point to consider for those just starting out in astrophotography. Choosing a telescope designed for users above your experience and knowledge level could prove a frustrating experience, so this is something to bear in mind.

Below you’ll find a selection of the best telescopes for astrophotography available right now, with their pros and cons highlighted. One of the especially great things with amateur astronomy today is that you do not need to spend a fortune to start taking some rewarding imagery of our solar system and the galaxies beyond…

Perfect first choice for beginners, whatever camera you use!

$156.23
View at The Home Depot
21 Amazon customer reviews
☆☆☆☆☆
Simple to use
Low cost
Would be a good choice for kids
Limited to basic, short exposure photography

The Celestron 80AZ Refractor is the best telescope for astrophotography for those just getting started out, or if you're on a on a limited budget. Though its mount is a basic un-drive alt-azimuth design, it will still enable you to get some impressive images of the lunar surface – which is by far the best initial target to try photographing. This telescope comes with an integrated smartphone adapter, which means you can mount your phone to the eyepiece to take photos. You could also easily mount a digital SLR to the telescope with a low cost adapter (available separately.)

If you're after the best telescope for astrophotography for under $200, we recommend the Celestron Astromaster 130EQ, which offers a great package for the slightly more experienced amateur astronomer. Its tracking equatorial mount will allow the user to try their hand at longer exposure astrophotography, and its larger aperture will start to show more detail in all manner of different objects. Its optical system – a Newtonian reflector – will require collimating to perform to its potential. This process can be tricky for beginners, but with practice it's easily achieved. The overall package here would make a sound choice as a first serious telescope for astrophotography, and with practice and patience offers potential to produce some impressive images.

This telescope offers many advanced features for the price

The Skywatcher Startravel 102 AZ-GTe WiFi GOTO is a great telescope for the price. Not only do you get a decent-sized refracting telescope at 102mm aperture, but it also comes with a WiFi-controlled GoTo tracking mount. The mount is Alt-Az in design, which means you will be limited to fairly short exposures. However, it is easy to set up and use, giving you speedy access to a wide range of targets. The mount also has a DSLR shutter release port for camera control. The telescope itself is well suited to general observation and photography, but perhaps best for lunar and planetary photography.

This telescope is a good example of one that is well suited to a particular area of astrophotography: due to its long focal length (1500mm), it is best for observing and photographing the Moon and planets. The telescope also comes with a Barlow lens to increase the focal length for higher power photography and observing. The whole package would be a great choice for those interested in specifically observing the Moon and planets, and its aperture is large enough to easily reveal features such as Jupiter’s Great Red Spot or clear views of Saturn’s ring system. However, it's not well suited to long-exposure photography of nebulae or galaxies.

The Meade ETX90 is a well-established, multi-purpose telescope aimed at astrophotography beginners. It offers GoTo and tracking capability in a high quality compact package. The telescope's rather long focal length gears it more toward photography of the Moon and planets, but it can be used to photograph the brighter nebulae and galaxies. It is also equipped with an AudioStar hand box with over 30,000 objects in its database built-in speaker. The telescope tube can be detached from the mount if you wish to use the scope on another tripod. There are also a wide range of different accessories available for the Meade ETX range.

The Skywatcher Explorer 150P would serve as a great choice for those looking to upgrade from the beginner-level telescopes. Its larger 150mm aperture will allow detailed images of planetary targets, as well as a wide range of nebulae and galaxies. It also comes with a proper equatorial GoTo mount designed for longer exposure astrophotography – although this mount and the Newtonian design do mean setup is more complex. The telescope comes equipped with a range of useful accessories, such as a polar scope to make polar alignment quick and easy.

High-quality optics with a multitude of advanced features

The Schmidt Cassegrain telescope is a very popular among amateur astronomers worldwide, thanks to its user-friendly design. The Celestron Nexstar 5SE is an entry-level system into this type of telescope. This well-designed telescope is suitable for most types of astrophotography, although perhaps best suited to lunar and planetary astrophotography as opposed to nebulae and galaxies, due to its longer focal length. There are also a wide range of accessories available, such as a device to allow automatic alignment with the night sky.

The final entry in our roundup of the best telescopes for astrophotography is the Celestron Advanced VX 8” Edge HD, which gives a flavour of the kind of telescope available to those with a larger budget. It represents an advanced amateur telescope capable of pretty much any task you’d care to give it. With superb quality optics and an excellent, accurate mount it offers a high performance level in almost every area of astrophotography. It also has the added bonus of offering a superbly user-friendly system. A telescope like this will provide a lifetime of observing pleasure to all but the most demanding observers.

The Sky-Watcher Heritage 114P telescope, though a small package, offers some great features for those wanting a small telescope to use for astrophotography. The mount provides a stable observing platform and will also track night-sky objects once located. The telescope can be slewed automatically in both axes, at five different speeds, via the mount's electronic keypad. Another cool feature is the Freedom-Find dual-encoder technology, which enables the telescope to be moved manually in either axis without losing its alignment or positional information. This is enormously convenient and offers great flexibility during observing sessions. The telescope also includes a Canon-D electronic shutter release cable, enabling automatic DSLR control at up to six preset positions.