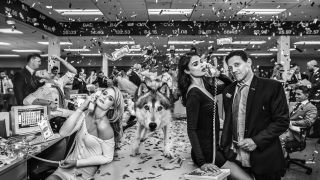 This award-winning photographer and conservationist needs little introduction, but for anyone who isn't familiar, David Yarrow was born in Glasgow and started out as a press photographer covering sports events.

While his photo of Diego Maradona holding the World Cup trophy aloft after leading Argentina to victory in the 1996 World Cup Final in Mexico City was seen around the world, Yarrow is now best known for his valuable work in wildlife conservation.

Sales of the Nikon shooter's prints have raised over £2.2 million for conservation NGOs, children's education in Africa and medical charities around the world.

Find out more about David's relentless pursuit of perfection and how he creates his dramatic images during his 'Living on Earth' talk on the Super Stage, on Monday 16 March 2019, 3.30pm.

In the meantime, find out more about David and his work as he answers five quick questions ahead of his Super Stage appearance…

1. Your talk will be titled 'Living on Earth'. What can we expect to hear about on the journey you're going to take us on from the extreme cold of Antarctica to the oppressive heat of Borneo?

I think I want to show that success normally comes after a lot of failure and in a lot of places you get it wrong. Then you learn from getting it wrong and try to get it right. It's not about just going to these places, because anyone can visit these places with Google these days and a bit of cash.

2. Do you get more excited by the work you do now, or is photographing the world's biggest sporting events the best buzz there is?

Photographing the world’s biggest sports events was a long time ago. I prefer to go to those events now as a spectator – it’s more fun.

There was always a buzz there but the problem was that there were also another 200 photographers on the pitch, whereas with what I do now, it tends to only be me.

3. Do you have a favourite photograph from your career? Or do you look at each of your best-selling images and think there's something you could have done better?

I think Mankind, taken way back in 2014 in South Sudan, was a big picture. That was taken on a camera with lower-quality resolution to the cameras you have now.

If I could go back now with better equipment there would be even less noise in the picture. You have always got to believe that the biggest pictures are ahead of you rather than behind you.

I think there are probably four or five big pictures in my career, and I wouldn’t want to change anything about them. That is why they are the big pictures they are.

4. You have said "… storytelling is started by the camera and finished by the viewer." How would you describe your role in this process?

My role is to engage the viewer so that he or she thinks there is a story there. You have always got to think about a picture that people can look at for a long time; if they can’t look at it for a long time then you have failed.

A key point of that is to make sure that the photographs aren’t loose, the framing isn’t loose, that there is enough action in the foreground and that it immediately grabs the viewer's eye and holds on to it.

5. What's coming up for you for the rest of this year? Will it be more assignments photographing iconic animals, or do you have some other interesting projects in the pipeline?

We have a lot of interesting projects in the pipeline but things move fairly quickly. We are hoping to go to Antarctica later on this year, but doing it in a very different way.

The world is a little disrupted due to the coronavirus at the moment, so we are taking each week as it comes. Going to China was on the plan at some stage this year, so we are having to adapt to the circumstances.

It has been very wet in East Africa which has altered our plans there, so we are spending a lot of time in America – currently we are in West Texas.

There are over 200 exhibitors and over 300 free talks and demonstrations at The Photography Show, and sister event The Video Show.

Tickets for the main show are available now, and you can get 20% off standard adult tickets if you buy them before 11 March – just use the code DCWTPS20 when checking out.

One of the most influential photographers of the past 20 years, Chase’s expansive portfolio ranges from shooting advertising campaigns for mega-brands including Apple, Nike, and Red Bull,  working with athletes including Serena Williams and Tony Hawk, and collaborating with global icons including Richard Branson and Lady Gaga.

Perhaps best known for covering the insurrection in Nicaragua and human rights issues in Latin America in the late 1970s and 1980s, Susan has been a member of Magnum Photos since 1980 and has produced an extensive body of work. Find out more about it during her 'A Life Through Photography' talk on the Super Stage.

Sharing over 13 million subscribers on YouTube as The Slow Mo Guys with his creative partner Daniel Gruchy, Gavin achieved fame by capturing high-end slow-motion videos of fascinating processes, such as a balloon bursting. On the Super Stage, Gavin will be speaking twice: sharing his insights into his life as a successful YouTuber (1.15pm), and the art of high-speed cinematography (3.30pm).

Anyone into their classic rock might want to hold onto their hats. Music photographer Ross Halfin has captured bands such as Aerosmith, Kiss, Metallica and The Hollywood Vampires – and now he's going to be taking to the Super Stage to discuss his craft, 'Four Stages of Rock: A Conversation with Ross Halfin'.

Juno's latest project, titled 'What To Do With A Million Years', saw her shoot a series in a Las Vegas bunker-mansion. She'll be discussing how and why she creates her photos, how she accesses the bizarre locations she uses, and the enduring allure of 'exposing herself'. She will also discuss her meticulously crafted self-portraits that feature her fictional alter-ego 'Joyce'.

Closing the line-up of Super Stage speakers, Shaden will be sharing how she led the charge into inclusive art – her award-winning photos are rich in storytelling and weave dark, whimsical and beautiful tales.

The Photography Show 2020: everything you need to know

Line-ups for Photo Live & The Studio stages at TPS 2020