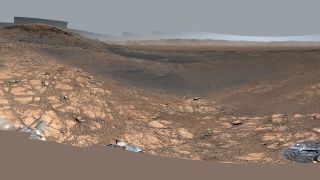 Is there life on Mars? Well, there's certainly a very busy little robot up there working incredibly hard – in fact, NASA's Curiosity rover even worked on Thanksgiving, producing an incredible 1.8 billion pixel 360° panorama on the red planet.

While the rest of us were overdosing on pumpkin pie and surfing for Black Friday bargains, Curiosity spent the 2019 Thanksgiving holiday photographing Glen Torridon – an area on the side of Mars' Mount Sharp, which it had been exploring.

It took over 1,000 photographs between 24 November and 01 December, using the telephoto lens on its Mast Camera ("Mastcam") to produce the high-res 1.8 billion pixel panorama. In fact, it even did double duty, using its medium-angle lens to capture a lower-resolution pano of 'just' 650 million pixels, which included its deck and robotic arm.

"While many on our team were at home enjoying turkey, Curiosity produced this feast for the eyes," said Ashwin Vasavada, Curiosity's project scientist at NASA's Jet Propulsion Laboratory, in a report on Phys.org. "This is the first time during the mission we've dedicated our operations to a stereo 360-degree panorama."

To ensure consistent lighting, the image were all shot between 12 noon and 2pm. In total the task took six-and-a-half hours over the four-day period, and required some complex programming from the Mastcam operators. Curiosity is a clever little thing, but it still needed human input to make sure that the camera was pointing the right way and that the images were in focus.

Of course, it's not the first time that the snap-happy rover has given us a billion-pixel peep at Mars. Back in 2013, Curiosity photographed a 1.3 billion pixel panorama using its dual Mast Cameras, with its black-and-white Navigation Cameras (Navcams) being used to take images of the little robot.

If you want to take a look at the full-resolution version of the panorama, make sure you've got 2.43GB free and download it from JPL.

This selfie photo is literally out of this world!
Hasselblad moon landing photos reissued to commemorate 50th anniversary
"Earth-size telescope" captures first ever photograph of a black hole