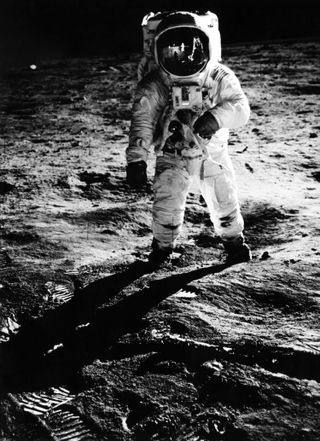 Buzz Aldrin on the surface of the moon, photographed by Neil Armstrong (Image credit: Hasselblad)

Hasselblad has reissued its 1969 press release and photographs of the first moon landing, to commemorate the 50th anniversary of the historic event.

It was, of course, the company's leading medium format cameras that were included in Apollo 11's payload to document mankind's first footsteps on the moon.

A Hasselblad 500EL Data Camera and a Zeiss Biogon 60mm ƒ/5.6 lens, with a 200-image magazine containing specially formulated thin-base Kodak 70mm film, was taken down to the moon's surface. It was painted silver to stabilize the camera when moving between temperatures ranging from -65°C / -85°F to over 120°C / 248°F.

A Hasselblad 500EL Electric Camera with a Zeiss Planar 80mm ƒ/2.8 lens was used as a second camera, to shoot from inside the Eagle lunar module.

"Hasselblad proudly celebrates its role in being the cameras that were chosen by NASA for space photography, and even more so, the cameras that documented the historical moment of the first men on the Moon," said the company.

"Celebrating 50 years on the Moon, Hasselblad is proud to have been part of a significant chapter in both photographic and human history. Stay tuned in July to see how we commemorate this momentous occasion."

The original press release and photographs can be viewed below. More information about the company's solar history can be found at the Hasselblad in Space page.

The most dramatic and sensational voyage of discovery in the history of humanity so far has been successfully completed. On the day that carries the name of our constant satellite, Monday, July 20, 1969, the American lunar craft nicknamed the “Eagle” with astronauts Neil A. Armstrong and Edwin (Buzz) Aldrin Jr. aboard landed in the Sea of Tranquility on the Moon. Above them in a circular orbit, astronaut Michael Collins waited in the mothership “Columbia” for his peers’ return. Astronaut Collins is the same man who, on July 21, 1966, lost a Hasselblad SWC in space. Neil Armstrong was the first man to put his footprints on the surface – tracks that will forever be there as long as the moon remains, since no wind can sweep them away.

An entire world of TV viewers and radio listeners followed Apollo XI’s journey from the start at Cape Kennedy on July 16 up to the moon landing on the 20th and the mothership “Columbia’s” landing in the Pacific Ocean on July 24, 1969.

Of course, the three astronauts’ families and NASA’s all-responsible earth technicians must have been the most troubled people before the adventure was over. Would it really go according to the carefully formulated plan? But neither were we at the Hasselblad factory in Gothenburg, who had built the 6 x 6 cm photo equipment, if truth be told, completely calm. Would everything work? Would the images taken with Hasselblad cameras really be the historical documents that the whole world was hoping for? We all knew our responsibility. Sure, everything was meticulously prepared and tested, but still...

Dr. Victor Hasselblad, the creator of the world’s first single lens 6 x 6 cm mirror reflex camera with interchangeable lenses and magazines, was invited by NASA to the Apollo XI start. As early as 1962, NASA had chosen Hasselblad for space photography. Since then, the cameras have been involved in their various versions on all the American space flights and have always worked flawlessly.

Dr. Hasselblad stayed in the United States until the images from the Apollo XI journey were released, personally picked up four color film rolls in Houston and flew directly to Sweden. The pictures were so good that even we who had previously seen 9,000 Hasselblad images from space gasped for breath. Not only that. Best of all were the images taken by astronaut Neil Armstrong on the moon surface. Even the images of earth taken by astronaut Collins were unique.

They showed other parts of the Earth rather than images taken during previous  journeys, including the “new Earth”, which can be found among the photographs in this press release. We were even more satisfied when the following telegram came from the United States regarding the black and white images that we, when this is written, have not yet seen: “The black and white film from Hasselblad EL Reseau camera with 60 mm Biogon taken on lunar surface was developed and the results are absolutely perfect. NASA people call it 132 prize winning pictures”. Those of us at Hasselblad who smoke lit a victory cigarette, just as the Houston Technicians light their victory cigars after every successful splashdown.

The black and white images in this press release are only a selection from the rich image crop. The Apollo XI astronauts who, with the “Eagle”, went down to the moon surface and performed the tasks according to plan. The work took two hours and twenty minutes and included one of the most important tasks of photographing on the moon with a Hasselblad 500EL Data Camera with Reseau Plate, Zeiss Biogon 5.6 / 60 mm lens, Synchro-Compur shutter and equipped with a polarizing filter. Astronaut Armstrong had the camera attached to his chest. He carried out all the photography on the lunar surface.

Before the “Eagle” started its journey back to the mothership, the astronauts left all the heavy equipment behind. On the surface of the moon among the “Eagle” undercarriage - the descent stage -, American flags and scientific instruments, the astronauts’ outer boots, moon overalls, backpacks, a TV camera and more, there are also two Hasselblad camera bodies with associated lenses. See further text no. 9. During the press conference held by the three astronauts after their stay in quarantine, astronaut Buzz Aldrin said: “It was quite exciting to raise the film magazines up to the Eagle. Imagine if the line had snapped!”

Neil Armstrong was left on the moon surface and attached the bags to the “line” Aldrin talked about. The last message he received over the Houston radio was: “Neil, this is Houston, you got the Hasselblad magazine up?” He replied, “Yes, of course”.

Particularly the images that were taken on the moon with a Hasselblad 500EL Data Camera with the Reseau Plate, where each image recorded clear measurement crosses, are now being carefully studied for the upcoming Apollo missions. Since the Apollo XI journey, over 10,000 Hasselblad images have been taken in space. There will be more. Already on November 12 this year, Apollo XII starts. Our next press release will include information and pictures regarding the equipment that the new astronaut crew will bring.