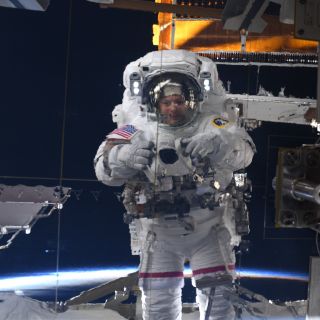 Astronaut's Jessica Meir's selfie. Shot with a Nikon D5 and 28mm lens in a protective housing (seen in the middle of the image) (Image credit: Jessica Meir/NASA)

If you are going to shoot a selfie, then you need to make a special effort if you want it to stand out on social media. If you are an astronaut, you have a natural advantage... but this selfie taken last weekend by Jessica Meir is literally out of this world!

The selfies were shot on a spacewalk from the International Space Station (ISS), where she is currently working as part of Expedition 61 and 62. Particularly impressive is the full length portrait (above) where Jessica used one of the solar panels as a mirror, with the Earth clearly visible in the background.

Fine, visor up this time – but at least the magnificent Earth still makes an appearance too. All #spacewalk #selfies (and other photos) made possible with a Nikon D5 with a 28 mm lens in a protective housing (visible in center of 2nd photo). #SelfieSunday pic.twitter.com/AlmUjvCWDjJanuary 26, 2020

The images were shot with a Nikon D5 fitted with a 28mm f/2.8D wide-angle lens – all housed in an all-white protective casing designed by NASA for spacewalks.

The image was shared on Jessica's Twitter account with the hashtag #SelfieSunday, and so far has been shared 1900 times.