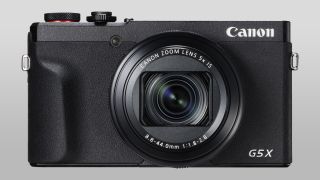 Canon has given its beloved G5 X a thorough revamp both inside and out to create a powerful all-round compact camera. The Canon PowerShot G5 X Mark II packs a newly designed exterior and plenty of new features on the interior, including a brand new lens, sensor and processor.

The Canon PowerShot G5 X Mark II's most noticeable change is to the chassis; where the previous model featured more traditional SLR-styling, with an electronic viewfinder jutting out in the prism position, the new version features a sleeker and more pocket-friendly form factor with a pop-up EVF.

(It should be noted that the G5 X Mark II and the newly announced Canon PowerShot G7 X Mark III won't actually replace their predecessors; both generations of each camera will continue to be sold side-by-side.)

Internally is where the big upgrades have been made, however. The camera uses a brand new 20.1MP stacked sensor, with the latest Digic VIII processor, giving improved ISO performance of 125-12,800 (expandable to 25,600) – which is DSLR territory.

It also boasts a brand new 5x optical zoom lens (up from 4.2x in the previous camera) with a 24-120mm equivalent focal range and  f/1.8-2.8 aperture with 9 blades, to create pleasing background blur.

In addition to burst speeds of 20fps, the Canon PowerShot G5 X Mark II features a brand new fully automatic 30fps mode. This captures full-resolution images in Canon’s CR3 format (convertible to jpg in-camera), and similar to Olympus’ Pro Capture mode it records from about a second before you press the shutter, so you never miss a moment.

Canon envisions the G5 X Mark II as a secondary camera for an existing EOS user, so everything from the UI to the functionality has been designed to feel and operate in a similar fashion for more traditional photographers.

As such, it now features Picture Styles that are now almost the same as those on EOS cameras, as far as settings and changes you make.

In video mode the G5 X Mark II shoots 4K video at 30fps with no crop, giving it a similar field of view to the Canon EOS M50, and it also shoots 1080p up to 120fps. The improved Star Mode now features 4K time-lapse support as well.

It now boasts the Panoramic Shot, with in-camera stitching, from the Canon PowerShot G1 X Mark III, as well as Focus Stacking inherited from the Canon EOS RP, enabling you to stack up to 100 frames (which need to be processed in DPP or other software).

The camera also boasts a tilting touchscreen (flipping 180° upwards to act as a selfie screen, and 45° downwards for low-angle shooting), a three-stop ND filter, and Wi-Fi and Bluetooth connectivity.