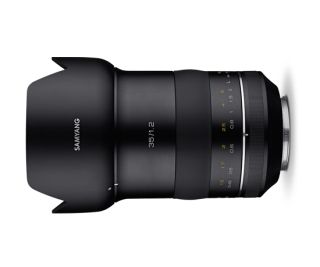 Samyang has unveiled a new wide-angled and wide-apertured prime lens is its XP series. The new 35mm f/1.2 lens will be available for full frame Canon EF mount – for use for DSLRs such as the Canon EOS 5DS or the EOS 6D Mark II.

The lens claims to be aimed to provide the quality needs by 50 MP or higher cameras, and future 8K filming.

The metal lens incorporates 12 glass elements in 10 groups - including two aspherical elements, three HR high-refractive elements and one ED extra-low-dispersion element. It has a nine-blade diaphragm and a minimum aperture of f/16. It has a front filter thread of 86mm, and comes with a petal-shaped lens hood.

As is usual with Samyang, the new lens will be sold under the Rokinon brand in the USA - where it will be called the Rokinon SP 35mm f/1.2