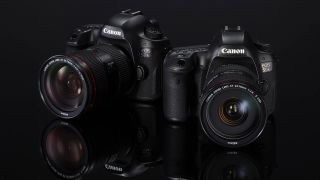 Does the thought of a 50MP resolution and all the imagined detail that could deliver excite? Well, that’s exactly Canon’s EOS 5DS DSLR and its 5DS ‘R’ variant offer.

Whereas with the standard EOS 5DS model you get a full-frame sensor with an optical low-pass filter included, the alternative EOS 5DS R option lacks this to, in theory, eke out even more detail, at the expense of aliasing effects such as moiré. As such, the EOS 5DS is better suited to things like fashion and architecture, where such issues can be more common from fine, repetitive detail.

To avoid the bugbear of image noise, sensitivity has been pegged at a core 100-6400, though this is manually expandable to ISO 50-12,800-equivalent settings. More interesting for creative types is that three-in camera crop modes are visible via the viewfinder: 1.3x, 1.6x – the latter still delivering 19MP shots – plus the life-like 1:1 option.

Reassuringly, as one would thoroughly expect, this is a robust workhorse of a camera too, with weather-resistant magnesium-alloy build, a 61-point AF system with 41 cross-type points, 5fps burst shooting, and larger than average fixed 3.2in LCD.

Being a full frame DSLR, we get a large bright optical viewfinder here, which displays 100% of the scene before us. While it is possible to accurately focus manually using this, there's also the option of switching to Live View and using the camera's LCD screen, on which the magnification can be upped to 6x or 16x to check detail to an even greater extent. Sadly, this screen is not sensitive to touch, nor does it tilt in any way.

In terms of images, Canon cameras typically produce photos with pleasingly well-saturated colours and the EOS 5DS is no exception. Possibly as a result of the extra pixels delivering the huge level of detail and smooth tonal gradations, some of the files have a bit more pep about them. Using the new Fine Detail Picture Style boosts micro contrast a little, bringing out small details and giving edges a naturally sharp look.

This 50.6MP beast is best suited to fashion and architectural photographers

Read more: 10 ways to get the best out of your Canon camera