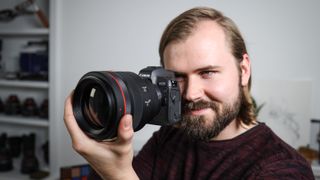 Rumors and speculation have been rife about a Canon EOS R pro version – which many have taken to calling the ‘Canon EOS RX’ – ever since the original model released last October. Now Canon has officially confirmed to us that something is in the works.

Not only that, but the manufacturer also told us that such a model would definitely have dual card slots. And if that weren’t enough, within the same conversation, it just so happened to mention that it is hard at work developing in-body image stabilization (IBIS).

“If we do, it will have dual card slots, it will be that sort of level, and under development is in-body image stabilization. So we are looking at this technology, it is in development with us.”

If you don’t speak the language of reading between the lines, we’ll translate: this is Canon signposting in the biggest flashing neon lights possible that it is indeed working on something akin to the ‘Canon EOS RX’ – with dual card slots and IBIS – without actually announcing it.

However, perhaps most interestingly, the manufacturer appears to be looking at IBIS not in isolation, but in terms of how it synergizes with Canon’s existing stabilization technologies: in-lens IS and digital IS (the on-sensor software that crops into your image/video to create a stabilization ‘buffer’ at the top and bottom of frame).

“I think in-body IS is really exciting for us, if we do bring it to market and it does come across, I think it could be really good and I think it says something about our [EOS] R series,” Parry continued.

“Remember I was saying about the [RF-mount] lenses and about the [speed of] lens communication, and we’ve just launched the 15-35 and 24-70 and 70-200 f/2.8, all IS. If you’ve got that coupled with in-body IS as well – and also we’ve got digital IS systems as well – I think that could be really, really exciting.”

This synergistic stabilization is what companies like Olympus and Panasonic have implemented in their higher end cameras, as ‘Sync-IS’ and ‘Dual IS’ respectively, with the former managing to achieve an astonishing 7.5 stops of image stabilization in the Olympus OM-D E-M1X. So for Canon to bring its own expertise to this technology really is exciting.

“If this goes ahead, if this comes to market, if this all happens, mixing in-body IS with the communication speed of the RF lenses, I think that could be something a bit special," concluded Parry. "So, I’m looking forward to what’s going to be happening with R-series cameras going forward.”