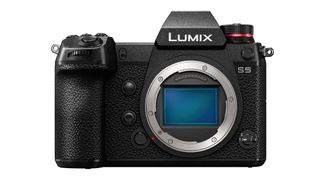 Our mockup of the Panasonic S5

According to a leak spotted by a Japanese news site, the Panasonic S5 is on the way. "Expected to be a small version of S1 mirrorless," it would seem to confirm Panasonic's recent statements that it wants to develop smaller, lighter and cheaper versions of its S-series of cameras.

The Panasonic S5 would join the Panasonic S1, S1R and S1H family of full-frame mirrorless cameras using the L-mount – but unlike its famously bulky siblings, the S5 would feature a body that's reduced in size, weight and price.

The new camera was apparently spotted by Nomadly (hat tip to L-rumors.com), and the report should be taken with a healthy pinch of salt for now. However, given its consistency with comments from Panasonic lately on its strategy for the S line, there certainly seems to be fire to this smoke.

In a recent interview with DP Review, Panasonic confirmed that it is working on different tiers of L-mount systems to compliment its high end (not to mention high price) S1 series.

"Initially, we really wanted to appeal to high-end users, to show that we could make those high-end cameras, to prove the quality of our cameras," Yosuke Yamane, director of Panasonic's Imaging Business Division, told DP Review in February. "In the future, we’re going to introduce mid-class, and different ranges of cameras.

"Overall, we’ve had a lot of appreciative comments from high-end users. What’s hindering us in the lower-end segment is size, weight and price. So we need to understand those obstacles, and we’re considering the development of new products in order to penetrate into a wider market."

Nikon made a similar move with the Nikon Z50, producing a smaller and lighter body that uses its new Z-mount – however, the Z50 features an APS-C sensor. Since Panasonic already produces celebrated cameras using the Micro Four Thirds sensor, the smaller-bodied S5 would still be a full-frame camera; Panasonic has no plans to overcrowd its product line with an APS-C L-mount system.

"Two different [L-mount systems] would be too much for us!" confirmed Yamane. "As of now, we have no plans to enter the APS-C market, because we know that Micro Four Thirds and full-frame can coexist without any cannibalization. If we moved into APS-C, there might be some overlap between Micro Four Thirds and APS-C, and between APS-C and full-frame, so I don’t think we’ll go in that direction."

With no information to go on, besides the camera's name and claimed existence, we have no idea what to expect of the Panasonic S5 in terms of specs and features. However, if this leak is indeed legitimate, expect more details to spill out soon…