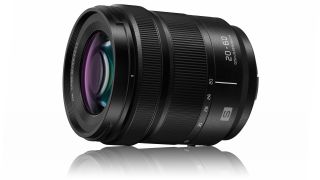 Panasonic has announced a new Lumix S lens for its full frame mirrorless cameras and it has a focal range we’ve never seen before. It’s enough to make us buy a camera just so that we can use this lens!

The Panasonic Lumix S 20-60mm F3.5-5.6 has a modest-sounding 3x zoom range but one that does the work usually done by two separate optics. At its widest it offers a 20mm focal length you would normally only get from an ultra-wide-angle lens and at its longest it offers an angle of view just slightly longer than a standard lens.

Don't let the focal lengths fool you. This is not a Micro Four Thirds lens, but a full frame L-mount lens for the Panasonic Lumix S1 and Lumix S1R, and Lumix S1H. It will, of course, also fit other L-mount cameras, namely the Sigma fp and the Leica SL2.

Normally, you’d need two separate lenses to do both of these jobs, so Panasonic seems to have pulled off a masterstroke with a lens that is both modestly specced and modestly priced.

There are ultra-wide-angle zooms that go much wider than 20mm, but 20mm is quite wide enough for most scenes, and a good deal wider than the 24-28mm minimum than the average full frame standard zoom.

And while 60mm is a little shorter than the 70mm or longer of most kit lenses, we’re willing to be that most of the shots we take with a standard zoom are at a focal length of 60mm or less.

The main thing is, for wide-angle fans, that now you can walk around with one lens on your camera instead of having to carry two and keep swapping between them.

The Panasonic Lumix S 20-60mm F3.5-5.6 is compact and lightweight, weighing just 350g. This is because it has a variable maximum aperture, from f/3.5 at 20mm to f/5.6 at 60mm. It’s not a premium constant aperture lens like many of the Panasonic Lumix S lenses, but that’s why it’s so compact, light and affordable.

It has a minimum focus distance of 0.15m to offer an impressive maximum magnification of 0.43x, so while it’s not a macro lens, it’s still going to be very good at close-ups.

The Panasonic Lumix S 20-60mm F3.5-5.6 is designed for video as well as stills, with suppressed focus breathing. It also has a rugged dust and splash-resistant design and has a fluorine-coated front element which is water and oil-repellent too. It. Takes 67mm filters and has a 9-blade circular aperture.

The optical construction consists of 11 elements in 9 groups, including two aspherical lenses and three ED lenses to suppress both axial and lateral chromatic aberration. There’s also a UHR (Ultra-High Refractive Index) lens to maintain image quality from the center to the edges of the image while keeping the lens compact.