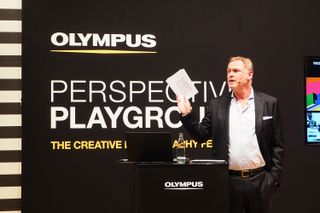 After Panasonic dropped the bombshell of its L-Mount Alliance with Leica and Sigma to produce the Panasonic Lumix S1R, Micro Four Thirds users were left wondering what would become of the format.

With its partner in the Micro Four Thirds consortium seemingly exiting stage left, many questioned whether Olympus would similarly abandon ship – a question that was definitively answered by the Japanese corporation at Photokina 2018.

“We believe the future of photography is mirrorless, but certainly not only full frame,” said Stefan Kaufmann, Olympus CEO of Europe, Middle East and Africa. “Micro Four Thirds will remain highly relevant, and we as a company will continue to invest and innovate in our camera system and our lens systems.”

Kaufmann cited Olympus’ pioneering contributions to mirrorless camera systems: the first Live View preview, the first five-axis in-body image stabilisation, and also noted (as has been the theme of the show) the mount that is nearly twice as large as the sensor in order to develop high quality lenses.

“Being a pioneer and innovator of mirrorless cameras, we strongly believe and we will continue to believe in the benefits of this sensor format. We will build on our strengths, but of course we will also as a Japanese company continue to work on the areas of improvement and when it comes to ease of operation we will become more Apple-style than before – much more intuitive.”

He drew an analogy from the automotive industry. “Would you judge the performance of a car by the size of its engine? Most likely not… So why should we judge a camera only by the sensor size? We passionately believe in a genuine alternative proposition where a micro four thirds sensor and mobility is key without sacrificing image quality.”

So, with the company still firmly behind the wheel of micro four thirds, was Olympus ready to reveal a new product, such as the Olympus E-M5 Mark III?

“This year’s Photokina is a different concept, and we tried to contribute to this concept with the Perspective Playground [Olympus’ photographic installation]. Basically it’s about the fun of photography, so we will this year not show a new product.

“We decided to decouple the Photokina event and the launch of a new product; for us, an important landmark will be the 100th anniversary of Olympus next year, and I would like to ask you to stay tuned…”