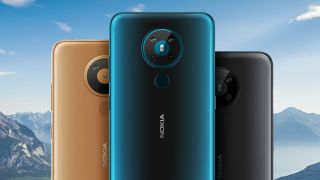 The company is focusing on the phone’s design and of course its rear camera system, which features Zeiss optics. That system includes three lenses and image sensors; the main camera has a 64MP main image sensor, supplemented by an ultra-wide camera, a macro camera and a depth-sensor.

The whole system has Zeiss certification, and Nokia is particularly proud of the wide-angle lens – which has large 2.8-micron pixels, video HDR and Ultra HD video recording capabilities.

The camera system also has a new Action Cam mode, which employs digital image stabilization to smooth out video, and reduces wind noise hitting the microphone. We’re not sure if anyone will grab the Nokia 8.3 5G instead of a GoPro Hero8 Black next time they hit the slopes, but it’s certainly interesting to see a phone manufacturer refer to its handset as an action camera.

Other photography and videography features of the Nokia 8.3 5G include being able to shoot in the cinematic image ratio of 21:9 with what HMD calls “cinematic colors”, and an always-on HDR system for enhanced contrast.

Set to feature in the upcoming (albeit delayed) James Bond film No Time To Die, the Nokia 8.3 5G has a large 6.8-inch display with a hole-punch selfie camera and protected by Gorilla Glass.

With its aggressive pricing, the Nokia 8.3 5G should help bring 5G to the midrange of the smartphone market – quite the achievement, since right now the technology has only been present on flagship handsets with four-figure price tags.