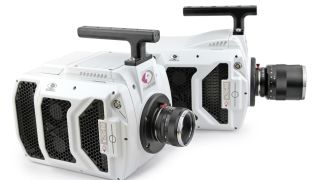 This isn’t its top speed, either. If you don’t mind using the monochrome version of the camera and lowering resolution down to just 1MP, you can reach 25,030fps.

You can take a look at some sample slow-motion footage from the Phantom v2640 below.

According to Vision Engineering, the v2640 has a very high dynamic range, preserving maximum detail in highlights and shadows, with the lowest noise floor of any Phantom camera helping out at the latter end. Its fastest shutter speed, meanwhile, is just 142 nanoseconds.

The v2640 has four main operating modes for different situations, including a Standard Mode with Correlated Double Sample for prioritising image quality, and a High Speed mode for increasing throughput. The monochrome version of the camera also comes with a Binning mode that's claimed to increase its speed and sensitivity further.

The v2640 carries up to 288GB of onboard storage, with the option to add 1TB or 2TB CineMags for extra storage if needed, while a 10GB ethernet connection is used for data transfer.

Pricing for both the colour and monochrome versions of the Phantom v2640 is yet to be announced, but based on previous models in the series, you can expect them to be in the hundreds of thousands. In the meantime, you can find out more about the v2640 on Vision Research’s website.