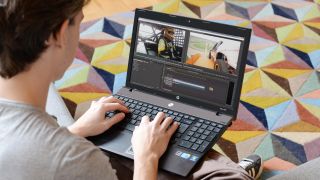 Editing videos is a power- and memory-intensive task, so cheaping-out on a bargain-bin machine just isn't going to cut it and would be a false economy. If you want fast rendering times with less hanging around while working through an edit, you'll need a laptop with a potent processor, lots of memory (RAM) and preferably a large monitor.

All this will inevitably result in a larger than average laptop, but this may not be that big an issue if you do most of your editing at home. Scaling things down will of course improve portability, but you'll soon find power, battery life and viewing ergonomics get severely compromised.

Screen size is therefore is the first thing to consider. Working within software like Adobe Premiere Pro often results in your screen being split into quadrants – a preview window, timeline, effects tab and a bin for all your footage. A small laptop won’t give you enough screen to comfortably work on long edits; 15 inches is a good balance of portability and screen real estate, but the larger you go, the more comfortable you'll find the editing process.

Then there’s the question of screen resolution and quality. Are you color-grading footage? If so, you likely want the most color-accurate display possible. Do you shoot and edit 4K or even 8K content? If so, then a Full HD screen won't cut it.

It gets more complicated when you consider a laptop's central processor, with the gold standard, Intel, offering everything from mobile chips through to its premium Core i9 line that boasts up to 8 processing cores. AMD is Intel's only real processor competition in this sector, and a laptop equipped with an AMD Ryzen processor can often be appreciably cheaper than an otherwise similarly-specced Intel-based machine.

Video editing laptops also need plenty of RAM which is used to temporarily store the footage you're currently editing. And don't forget connections. A Thunderbolt 3 port, for example, will mean a laptop can be kitted out with an external graphics card, giving it desktop-grade rendering power when you have space for this extra hardware. Meanwhile, an SD card reader will save you having to use dongles or adapters when importing footage, but sadly integraed readers are becoming a rarity in today's wafer-thin laptop chassis.

With all these factors in mind, here are the 10 best laptops for video editing in 2020.

The best laptops for video editing in 2020

If you’ve got a lot of cash to invest, the Acer ConceptD line is a series of laptops and desktops that have been fine-tuned for designers and editors. Specifically, the ConceptD 7-series laptop has gaming laptop power without any of the gaudy casing or attention-grabbing RGB lighting. It’s also quiet, staying cool without loud fans whirring/roaring away.

Ideal for color grading, the Acer ConceptD 7’s 4K UHD display covers 100% of the Adobe RGB gamut, and its color fidelity is Pantone validated, with a color accuracy of Delta E <2. With the latest hexa-core i7 internals from Intel, an Nvidia GeForce RTX 2080 graphics card and up to 32GB RAM, whether you’re processing out Full HD or 4K footage, Acer’s Concept D should make short work of it.

Apple’s MacBook line has become the industry standard for a lot of designers and editors, and while that's in part down to a hangover from the prestige the brand has garnered with the industry in the last three decades, it’s also got a lot to do with Mac OS and Apple’s incredible trackpad.

The latest 16-inch MacBook Pro can be specced with anything up to a 9th generation, octa-core Intel Core i i9 processor, a whopping 64GB of RAM and Radeon Pro 5500M graphics. But even an entry-level 16-inch MacBook Pro should keep you going whether you’re working through large edits or complex After Effects projects.

The MacBook’s context sensitivity is what really sets it apart though. For example, the Touch Bar, a touch-sensitive horizontal screen above the keyboard, changes depending on what app you’re using. In Premiere Pro, for example, it presents quick options to scrub through footage, showcase keyboards and more.

Meanwhile, the laptop’s trackpad vibrates when interacting with different elements in different apps – it gives you haptic feedback, for example, when one clip you’re dragging snaps to another in video-editing apps. Combined with up to an 8TB SSD and a gorgeous, sharp display, it’s no wonder so many love it.

The Razer Blade 15 is one of two laptops in our roundup to feature an optional OLED display with 4K resolution no less. With deep, inky blacks and punchy, vibrant colors, it looks incredible, and with a pixel density of 282, it's super-sharp – perfect for editing your UHD content on.

With its cutting-edge Nvidia GeForce RTX 2080 graphics it’s up to the task when it comes to even the most demanding projects, and when you consider how many ports this thing has – three USB-A ports, one HDMI 2.0b port, a Mini DisplayPort, Thunderbolt 3 port, and a headphone jack, it’s versatile too. If you opt for the base version, you even get an Ethernet port for fast, wired internet.

The Razer Blade 15 doesn’t offer as much storage as the competition, but its light weight and sleek finish still set it apart, with its black or white matte metal body looking sensational.

Asus' ROG (Republic Of Gamers) laptops have historically been big beats designed for ultimate power at the expense of portability. But not with the ROG Zephyrus G15. This relatively svelte machine measures 359.92 x 251.97 x 20.32mm and weighs just 2.1kg, which is impressive given the power lurking within.

A potent 8-core, 2.9 GHz AMD Ryzen 7 4800HS processor is easily up to the job of intensive video rendering, especially when backed up by 16GB of RAM. GPU-accellerated rendering will also be speedy thanks to a fast Nvidia GeForce RTX 2060 graphics card with 6GB VRAM.

The Microsoft Surface Book 2 is an incredible feat of engineering, with an electro-magnetic latch that securely connects the tablet section to the keyboard without a wiggle or a wobble in sight.

The laptop can be specced up to become the ultimate editing device with Intel Core i7 graphics and up to 1TB SSD storage. It’s also got an SD card reader in the keyboard section, and supports pen input, whether you’re using it as a tablet or laptop.

With optional Nvidia GTX 1060 graphics it can also handle advanced 3D gaming, video edits, and even take After Effects renders in its stride; and thanks to a stunningly sharp, vibrant, 15-inch PixelSense display with a 1600:1 contrast ratio, everything it showcases looks stellar.

The overall experience is rounded off with great battery life and ultimate versatility; as a package, the Surface Book 2 is one of the most impressive bits of tech we’ve ever used.

The Dell XPS 15 is the 4K OLED-screened laptop to go for if you're not into gaming. While it uses an identically specced display to the Razer Blade 15, which is also in this roundup, its design and feature set are better suited to video editing.

For starters, it has an SD card slot, and up to Intel Core i9 power, not to mention up to 32GB RAM – and with up to 2TB solid state storage it’s also an ideal machine to have when ingesting GBs of 4K content.

While its Nvidia GeForce GTX 1650 graphics aren’t going to stack up against some of the top-tier competition, thanks to the Thunderbolt 3 port you can supplement it with an external, desktop GPU for more demanding projects – and for quick edits on the fly, it'll be more than up to the task.

The HP ZBook Studio is the option for an editor who needs maxed-out specs, portability and versatility. It’s one of a select few laptops to have 64GB RAM option, and this is supplemented by a healthy 2TB of storage and Intel Core i9 power.

Its screen folds back over itself to deliver a tablet form factor, and thanks to the Wacom digitizer under the display the included pen delivers 4096 levels of pressure sensitivity – perfect for anyone who needs to illustrate elements of their video edits or animations.

Available with a range of display options, peaking with the 4K Dream Color panel, it covers 100% of the Adobe RGB gamut, covering one billion colors and featuring a max brightness of 600 nits – all top-of-the-line credentials.

Combine all that with an SD card slot and a solid array of ports, and the ZBook Studio X360 could well justify its high asking price if you need an incredibly versatile, powerful machine.

Acer’s Helios line delivers gaming power at a comparatively affordable price when looking at the competition, especially given how much is crammed into these laptops. That also means video professionals can benefit from its clout without necessarily breaking the bank.

Available with Intel Core i7 power coupled with up to 32GB RAM in its top-of-the-line guise, it can rival some of the best laptops around, and thanks to ample storage – up to a 1TB SSD plus a 2TB hard disk drive, it’s a perfect option for 4K footage hoarders.

Like some other gaming laptops, there’s a Turbo button you can hit to overclock performance for intense editing bouts, and there’s also granular control over the fan, so you can ramp it up or down depending on whether you’re in the mood for a cool laptop or a quiet workspace.

No price information
Check Amazon
See all prices (1 found)
Sharp, bright touchscreen
Over 90% screen fascia
Not available in the US
No SD card slot
Pop-up camera is terrible

Huawei’s MateBook X Pro is a MacBook alternative with a difference – the difference being, it actually out-MacBooks the MacBook in a few key areas. It packs a gorgeous metal build, biometric security and excellent speakers considering how thin it is, feeling more like Apple's Air than its Pro. Meanwhile, it still manages to get an 8th-gen i7 processor loaded up inside and a full-sized USB port, so you won’t have to carry a dongle with you.

Given its size, it’s excusable that there isn’t a beefier graphics card inside for heavy edits, but the GeForce MX250 is up to light-to-moderate editing work, and thanks to its Thunderbolt 3 port it can be supplemented with an external GPU when you really need to power-up your performance.

With up to 1TB SSD storage, 16GB RAM, and a stunning 3000 x 2000 touch-sensitive display, if you need something thin and light the MateBook X Pro is definitely worthy of your consideration. As for its Achilles’ heel, its pop-up webcam, while great from a security point of view, is frankly terrible for video calls - a feature to avoid.

If you’re running a business and your video editors don't need MacBooks (much as they might want them), the Lenovo ThinkPad P53 is a traditional-looking laptop with incredibly capable internals. Available in options ranging from an entry-level configuration that will handle basic edits, through to a supercharged version capable of tackling huge 4K masterpieces, it’s as versatile as your business needs it to be.

One of the only laptops on our list with an Ethernet port, the latest version also features two Thunderbolt 3 ports and a SIM tray for fast 4G speeds on the go.

For editors working with HDR content the P53’s optional Dolby Vision 4K touch display is on another level, with tones that other laptops will completely miss. And with up to 32GB RAM and 1TB SSD storage, this laptop will fly through edits and give you plenty of space to store them.

The best camera for vlogging