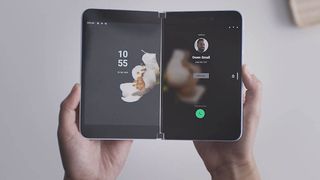 Is it a camera phone? A tablet? Or a throwback to the ugliest word ever coined – a phablet? It seems Microsoft doesn't even know what the Microsoft Surface Duo is, as any internal communications describing the Surface Duo don't call it a phone – despite the fact that it can make phone calls and send texts. This upcoming product was announced back in October 2019, but specs have recently been leaked that start to reveal what this phone-not-phone might be able to do.

The Microsoft Surface Duo will be running an Android system, rather than the expected Windows 10. This is an unusual move from the company that has proved controversial with some Microsoft fans. The Surface Duo design is similar to that of a folding phone, but rather than being made out of one flexible screen, this product has two screens that fold together on a hinge.

The Microsoft Surface Duo will have a Qualcomm Snapdragon 855 SoC, but unfortunately it won't be able to support 5G. According to tech site Windows Central, this is apparently due to an issue with the Snapdragon 855 processor that would require an internal redesign. The Surface Duo is expected to have 6GB of RAM and between 64 and 256GB of internal storage.

The dual screens on the Microsoft Surface Duo are both 5.6" displays with 1800x1350 resolution with 401 pixels per inch. The screens are connected by a 360-degree hinge, rather than other foldable phones such as the Samsung Galaxy Fold that are made out of one single screen.

Any camera phone photography enthusiasts might unfortunately be left disappointed with the Microsoft Surface Duo's camera offering, as there is only a single front-facing 11MP camera on one screen (although it can be wrapped around the back to be used as rear camera too.