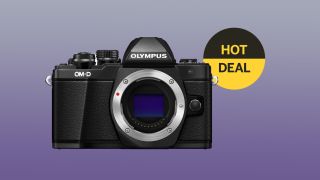 With the Memorial Day sales beginning, we're starting to see some fantastic camera deals popping up – including this fantastic $200 discount on the Olympus OM-D E-M10 Mark II. This Micro Four Thirds camera is down from $549 to just $349, so if you've been waiting to get your hands on the E-M10 Mark II, now's your chance.

The Olympus OM-D E-M10 Mark II has a 16.1MP Micro Four Thirds sensor and a TruePic VII Image Processor. It's capable of up to 8.5fps shooting and Full HD 1080p/60 movie recording. It has in-camera 5-axis image stabilization, which compensates for up to four stops of camera shake so you can achieve beautifully sharp images, even at slower shutter speeds.

The Olympus OM-D E-M10 Mark II features a contrast-detect autofocus system that employs 81 areas to quickly and accurately focus on your subject. It also has built-in WiFi that not only allows you to instantly share your photos, but also means you can use the Olympus Image Share app to transform your phone into a remote camera control.