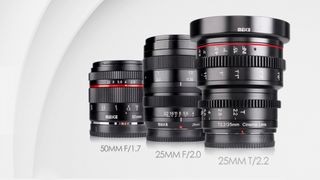 For those who aren’t wedded to brand names and aren't afraid to try something a little more unconventional, lesser-known third-party manufacturers can be a great source of budget glass.

One such manufacturer is Chinese firm Meike, who has teased the release of three new interesting lenses on its website: 50mm f/1.7 and 25mm f/2, and a 25mm T2.2 cine lens.

The one we have the most information on is the 50mm f/1.7, thanks to ePhotoZine. A manual-focus-only lens, the optic is designed for mirrorless systems, and expected to be available in Sony FE, Canon EF-M, Nikon 1, Fujifilm X and Micro Four Thirds mounts. It’ll also carry a 12-blade aperture, with a minimum focus distance of 0.5m and a 0.11x magnification ratio.

Read more: 8 bizarre lenses you can use with DSLRs and mirrorless cameras

Also teased is a 25mm f/2 lens, another stills lens, and the 25mm T2.2 cinema lens for video shooters. Concrete information on these optics is still to come.

We don’t have full pricing information on these lenses yet, but based on the rest of Meike’s offerings they’re likely to be fairly easy on the wallet. The first to be released will be the 50mm f/1.7, which is expected towards the middle of March, and the other two should follow shortly after.