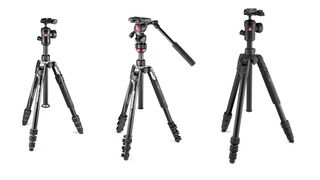 The Manfrotto Befree travel tripod collection has proven popular since launch, with a winning combination of lightness, versatility and stability.

The firm is adding three new travel tripods to this range, designed for advanced enthusiast photographers and professional content creators who need stable, all-in-one camera supports to take on the go.

This is billed as ‘the most versatile model in the Befree range’, an all-in-one support that can be converted quickly into a sturdy monopod. While tripod/monopod combinations are nothing exactly new, the Befree 2N1 is designed with an emphasis on speed. A single half-turn anti-clockwise makes a red rubber ring appear on the tripod leg, providing a visual cue that it can be safely removed to be used as a monopod.

The Befree 2N1 is also designed with security and stability in mind, utilising a dedicated locking system that Manfrotto says should ensure total absence of play (small movement or drift) whether it’s working as a tripod or a monopod. It also has a conjunction cap on its central column that firmly connects the leg to the column, which gives shape to the monopod.

Two versions of the Befree 2N1 is available in two versions – the more advanced Quick Power Lock version with levers and the M-Lock version, both priced at £199.95. It’s expected to be available from September 15th.

A more stylish version of the Befree travel tripod, the Befree Nerissimo is made with high-quality aluminium and a matte black finish.

It’s going to be available exclusively from www.manfrotto.co.uk from October 1st, priced at £174.85.

There have already been Befree Live tripods in aluminium and carbon fibre, however this new model is built with a Quick Power Lock lever, designed for photographers and videographers who prefer a lever lock system.

It makes use of construction elements from the Befree Advanced range and adds the fluid live head, providing a well-balanced combination of stability and versatility. The release date is yet to be confirmed, but we do know it’ll be priced at £224.95.

Buyers' guide: The best tripods for travel, the best monopods you can get right now