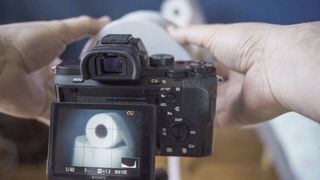 All photographers suffer from gear acquisition syndrome, but during lockdown there was one thing even more coveted than new camera kit: toilet paper. So bored photographer Mathieu Stern did the only logical thing, and combined these two urges to hoard.

"There is no concrete reason why we need more toilet paper than usual during this Pandemic but maybe one good reason is that everyone want's to make camera lenses?" jokes Stern, who himself was infected with coronavirus.

"Thanks for your nice messages, I feel better now after 2 weeks of COVID-19 sickness, I am back at creating weird lenses even during quarantine!"

Stern is a popular YouTuber and is a well known purveyor of weird lenses, even maintaining his own Weird Lens Museum online. So this fully functional camera lens – which, in all seriousness, performs no worse than a lot of Holga camera lenses prized by hipsters – is right up the photographer's alley.

He started by inserting a single lens element inside a full roll of toilet paper (the full roll wasn't a technical requirement, you understand, but a very important part of the aesthetic design). Then he used an aperture ring adapter to construct a focusing barrel using a second, empty toilet roll tube that was tapered with gaffer tape (it was important that this tube was empty, in order for the first roll to mount on it).

The 'lens roll' was then attached to the focusing barrel (barrel roll?), which could then be pushed forwards and backwards to manually focus the lens. Et voila! A full working camera lens that was mounted to a Sony A7 II (we're sure that Canon and Nikon fans will have plenty of laughs at the fact that a Sony camera is fit for a lens made out of toilet paper).

His sample images were soft, hazy, and full of chromatic aberration – but honestly? For a lens made from toilet roll, they look great! And as noted, a lot of very trendy photographers spend loads of money on Holgas and Lomography gear and beaten-up vintage lenses trying to achieve this kind of look.

Make sure to visit Mathieu Stern's YouTube channel for lots of far more serious, but no less creative, photography videos and weird lenses.

The best Sony camera in 2020: from Cyber-shots through to Sony Alphas
The best Sony lenses in 2020: top lenses for Sony mirrorless and Alpha cameras
Free lensing: get the Lensbaby look and take macro shots with any standard lens