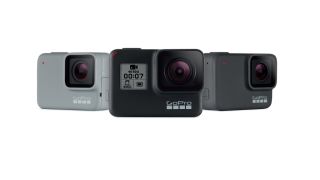 Most companies do their sales on Black Friday, or on Boxing Day… but Currys has just started its own price-cutting event. Its 100-hour sale lasts until Tuesday night, and cuts the cost of a number of popular items.

The discount that took our interest is on the GoPro Hero7 Silver – it was only launched in September and, sitting just below the Hero7 Black, is one of the best GoPro models in the current line-up. These little pocket cameras are perfect for any skateboarder, cyclist, skier, adventurer, or traveller.

This camera shoots video in 4K at a frame rate of 30p. As for stills, you get a 10MP camera with a maximum burst speed is 15fps rather than 30. It has a Wide Dynamic Range functionality that can be used to push shots a little further. It records sound with a two-microphone setup.

Other tempting discounts include £150 off selected Macbooks.

GoPro Hero7 Silver: £219 (save £60) A great little deal for the weekend here – and £60 off what the camera was selling for at Currys (and its competitors) before the sale. Deal ends: midnight, 8 January. Use discount code: GOPRO60View Deal