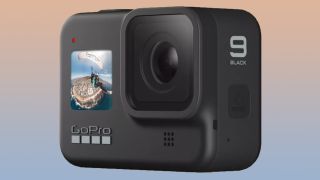 A mock-up of the GoPro Hero 9 from TechRadar (Image credit: TechRadar)

We could be seeing the GoPro Hero 9 released as soon as this September, if GoPro are going to continue following their traditional release schedule that has seen a flagship action camera released every September or October for the past decade. So far this year the internet has been very quiet on the GoPro Hero 9 front – which is not entirely surprising considering everything that's happened so far in 2020.

We had been beginning to wonder whether the GoPro Hero 9 could be delayed until later on in the year. However, we've recently seen some exciting GoPro Hero 9 news that suggests that we could potentially be on track for a September 2020 release date.

A leaked photo (via Photo Rumors) of what appears to be the front plate of the GoPro Hero 9 shows two large holes. One will obviously be for the camera itself (positioned on the top right hand corner of the camera). However, the other is the subject of debate on an interesting Reddit thread. On the GoPro Hero 8 Black, there is an LCD screen that allows you to quickly check what mode you're shooting in, how much battery you have left and other essential info.

However, the hole on the GoPro Hero 9 front plate is significantly larger than on the Hero 8 Black, appearing almost the same size as the cutout for the camera. Due to its larger size, some commenters posit that this could be a front-facing color LCD screen to help users frame front-facing video. GoPro clearly knows that there would be a market for this, considering that the company launched a front-facing screen Display Mod that connects with the GoPro Hero 8 Black. The DJI Osmo Action and the Akaso Brave 7 LE already have front-mounted LCD 'selfie' panels.

While we can't deny that a front-facing screen on the GoPro Hero 9 would be a more than welcome addition, as you can see from the mock-up above courtesy of our colleagues at Techradar, we do wonder whether GoPro would necessarily want to bring out a product that would make the Display Mod obsolete. In addition, adding a selfie screen would also increase the cost of production. GoPro would then have to decide whether to absorb that cost, or pass it onto the consumer and make the GoPro Hero 9 more expensive.

The other interesting tidbit of information that we can tease out of this leaked photo is that it appears that GoPro are unfortunately not going to be bringing back the removable lens cover that GoPro fans have been clamoring for. The GoPro Hero 8 Black was the first GoPro to get rid of this component as part of a significant redesign that shrunk the size of the camera. However, removing the lens cover has meant that there's no longer any additional protection for the GoPro camera lens.

Considering the fact that GoPro cameras are specifically meant for capturing the action, this does leave them more vulnerable to damage. GoPro has compensated for this danger with their GoPro Plus plan, a $4.99 / £4.99 / AU$5.83 per month cloud storage and insurance plan that enables you to replace a damaged GoPro up to twice per year.

Receiving almost $60 per year from each GoPro user just in case their camera is damaged will likely be much more profitable than selling circa-$20 replacement lens cover components, so we're not surprised that GoPro has apparently decided against bringing the lens covers back.

At present, the leaked GoPro Hero 9 front plate photo is the only substantial piece of information we have on this upcoming camera. However, we'll be updating this article with new information as soon as we see it.