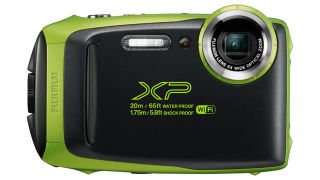 Fujifilm has refreshed its everything-proof FinePix XP waterproof camera line with the XP130.

The XP130 can be taken 20m underwater and is protected against dust ingress, with the camera complying with the IP68 protection standard. Not sure what this means? Our friends at Techradar explain.

Additionally, it can be dropped from a height of 1.75m, and remains operational in temperatures as low as -10ºC.

Available in six different colours, including the fetching lime green shown here, the camera is based around a 16.4MP back-illuminated sensor and a Fujinon lens, the latter of which offering a focal range equivalent to 28-140mm in 35mm terms.

Fujifilm claims that the defined grip makes one-handed operation easier, and also that the external controls have been positioned and designed in such a way that makes their operation straightforward if wearing gloves while skiing.

Wi-Fi and Bluetooth have also been included on the XP130, which allow the camera to sync with smartphones and tablets. Additionally, when using the Fujifilm Camera Remote app that's available for iOS and Android users, it's possible to append location information to images, while INSTAX Share printer owners can also deliver their images to their printers wirelessly.

Turning the camera around reveals a 3in LCD screen with a 920k-dot resolution, and Fujifilm claims this has been designed to inhibit reflections for better visibility.

Other features include 10fps burst shooting and a newly installed electronic level, together with optical image stabilisation that's designed to keep images crisp and videos stable.

Furthermore, in addition to Full HD video recording, users can opt to use a Time-lapse Video feature, while the Cinemagraph option allows for the capture of still images with moving element.

The FinePix XP130 will be available from February priced at £199 in the UK.