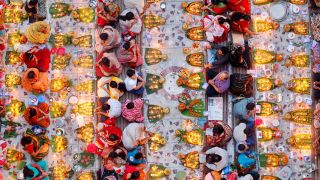 The results of the Pink Lady Food Photographer of the Year 2018 competition have been announced at a ceremony in London, hosted by TV celebrity and top restaurateur Prue Leith.

This year the gong goes to Bangladeshi photographer Noor Ahmed Gelal, whose shot titled 'Praying with Food' depicts the breaking of a day-long fast for a section of the local Hindi community at a temple in Swamibag, Dhaka, Bangladesh. It is the Hindu belief that fasting is necessary to cleanse a person of sin.

The image also won in the Food for Celebration category, sponsored by Champagne Taittinger.

Belal was presented with his £5,000 prize by head of Pink Lady, Andy Macdonald, at the awards reception held at the Mall Galleries, London, this evening.

“The competition was fierce,” Macdonald said. “There were 8,000 images entered from 60 countries and the standard was exceptional.

“Noor’s shot stood out from the rest in its category, however, for the way in which he made the subject matter so fascinating and distinctive.”

At the ceremony, legendary British social documentary photographer Martin Parr was honoured for his work showing food in its cultural place in various sectors of society, and was presented with the Outstanding Achievement Award by Frances Morris, Director of the Tate Britain.

Other category winners included Jade Nina Sarkhel from the UK, whose image of one of a bakery in Mumbai, titled 'Rex Bakery', triumphed in the Food for Sale category.

“Straddling a gutter, I captured the bullet-stricken walls of one of Mumbai’s oldest bakeries,” she said. “The bakery churns out 18,000 paos a day, operating 24/7 selling bread through the keyhole counter overnight. Bread is given for free to those who can’t afford it. It’s places like this that knit communities together in India.”

The Fujifilm Award for Innovation, which celebrates photographers who are doing something different, was given to Philip Field for his image titled 'Ostrich Horizon'.

Describing the process of taking the image, he said: “Whilst travelling across the Serengeti, our driver stopped temporarily whilst navigating a dip in the terrain. At that moment, I spotted a flock of ostriches walking across the brow of a hill in the fading light and was able to quickly capture this shot before they disappeared.”

The awards weren’t just for stills photographers – videographers were also honoured at the event, with the Unearthed Food Film Shorts supported by Foodism category winner being the With Love Food project, for a film titled “For the Love of Food”.

“We travelled to Skye to meet some of the island's most exciting food producers and then on to see Michael Smith at his new restaurant 'Loch Bay' to bring together all the produce we collected,” the company said.

Many other photographers were praised in the many categories on offer, everyone from food bloggers and professional wine photographers to children as young as 10. To see more shots and stories from the Pink Lady Food Photographer of the Year Award, head to the competition's official site.