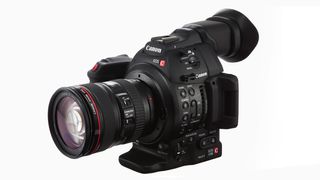 There might be plenty going on in the world right now, but it seems that the secret cogs at Canon are continuing to whir behind the scenes. According to the latest rumors, it seems that Canon is actively working on a new product line – a Cinema camera with an RF mount.

Apparently, this Canon RF Cinema camera could be similar to the already existing Canon Cinema EOS C100 Mark II. This form factor and design of this new camera is also rumored to resemble the XC camcorder lineup.

An RF mount Cinema camera would certainly be exciting. Canon has long touted the impressive optical and technological capabilities of its new mount, and it would only be natural for the imaging company to want to make the most of it.

According to rumor website Canon Watch, it's expected that Canon will announce a new Cinema camera on 20 April. However, this is likely to be the Canon Cinema EOS C300 Mark III.

We're certainly excited to see how the RF mount performs in a cine setting, but it's likely we won't see the fruits of Canon's labor on an RF mount Cinema camera for a long time. However, it's certainly a tantalizing proposition – and we'll keep you up to date on any new rumors we hear in the meantime.