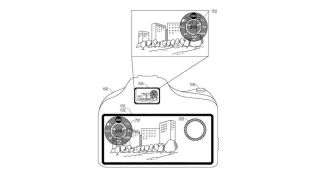 As if the upcoming Canon EOS 1-DX Mark III wasn't exciting enough, it looks like a revolutionary new Canon mirrorless camera might be finding its way to production soon. Canon have recently filed a patent application for a mirrorless camera with a particularly unique design.

As reported by rumor website Canon Watch, one of the most interesting aspects of this patent application is that the virtual control wheel is also seemingly displayed in the electronic viewfinder. Whether this suggests that a riff on Canon's divisive eye-controlled focus could be making a comeback or not, we couldn't say - but being able to choose your settings simply by looking at a particular menu option would certainly be an interesting design feature.

There also seems to be the possibility for more than one virtual control wheel on the screen. We would assume this is meant to make up for the apparent lack of dials and controls on the top of the camera as well.

We can't imagine this as a design for a high-end professional Canon mirrorless camera model, as the lack of physical controls could be off-putting for pros who need to be able to rely on muscle memory for difficult shooting situations. However, we could potentially see it being an interesting design for entry-level cameras designed to snap up smartphone users looking to upgrade.

Canon are well known for filing patents that never see the light of day, but we could definitely see a smartphone-savvy market for this interesting Canon mirrorless camera design. However, we'll just have to wait and see whether it ever sees the light of day…