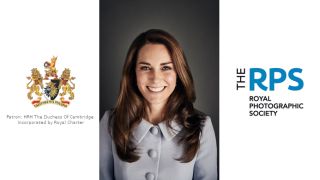 Kate Middleton, The Duchess Of Cambridge, has become the new Patron of the Royal Photographic Society, which has enjoyed Royal Patronage since 1853 when Queen Victoria and Prince Albert became Patrons.

It is perhaps fitting that Kate was the first Royal Patron of the Victoria and Albert Museum in London. Her RPS patronage succeeds that of Her Majesty The Queen, who has been Patron of the Society since 1952.

While patronage hasn't traditionally equated to any implicit interest in photography from the monarch, in this case it's an appropriate fit as Kate is a keen photographer in her own right – her brand of choice being Canon equipment.

"The Duchess of Cambridge has a longstanding interest in photography, and this patronage will further highlight the beneficial impact that art and creativity can have on emotional wellbeing, particularly for children and young people," wrote Kensington Palace on Instagram.

The Duchess of Cambridge is a passionate photographer and today her Majesty The Queen passed the Patronage of the @royalphotographicsociety on to her, having held the role for 67 years. The Royal Photographic Society was founded in 1853 with the objective of promoting the art and science of photography. On a personal note it’s a fantastic organisation who produce a high quality monthly ‘Journal’ - If you are interested in photography membership is certainly something worth looking into. If you have a copy of my book (if you don’t - why not!?, link in bio) Michael Pritchard, CEO of the society, wrote a insightful foreword discussing the historic links of photography to the Royal Family and the Royal Photographic Society #modernmonarchy Chris Jackson

Kate's fondness for photography first came to public light back in 2012 when her photographs of Borneo, shot on a Canon PowerShot G12, were released by St James's Palace.

She also made headlines in 2015 when she took the first public photographs of Prince George and Princess Charlotte together, this time shot on a Canon EOS 5D Mark II.

Her new patronage was announced ahead of her visit to a photography workshop run by the Royal Photographic Society in conjunction with Action for Children – another of Kate's patronages, which is supporting its 150th anniversary this year.

“It is a huge honour to have the Duchess as our Patron, especially given her personal interest in photography," said RPS COO, Mike Taylor. "We know that photography and creative pursuits have such a positive impact for people of all ages, and we are excited to be working with one of the Duchess’s charities in support of their work.”