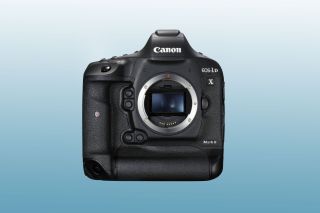 With Tokyo 2020 beginning to loom on the horizon, it's set to be an exciting time for camera news. With Nikon having already announced the development of the Nikon D6 DSLR (but admittedly with no detail at all), we're eagerly awaiting an official announcement of the Canon EOS-1D X Mark III with baited breath.

Luckily, although Canon themselves are keeping pretty quiet about the 1D X Mark III, we're being kept entertained by a steady stream of interesting leaks.

Rumor website Canon Rumors recently reported that a 'very solid source' has given them a few pieces of information on what could possibly be part of the brand new flagship Canon DSLR.

Apparently, the prototype models of the Canon EOS-1D X Mark III have dual CFexpress cards – just like on the just-announced Canon EOS C500 Mark II – and it's likely that these will make it to the production version. This blisteringly fast memory card format will likely prove very popular with sports and wildlife photographers who need their cards to transfer large amounts of data very quickly.

There will also reportedly be a "significant jump in resolution for an EOS-1 series camera". The Canon EOS-1D X Mark II had a 20.2MP sensor, so perhaps we could be seeing a 24MP sensor (or higher!) in the Mark III? The 1D X Mark III will also apparently introduce a new DIGIC processor.

Most excitingly, apparently the Canon EOS-1D X Mark III will be able to shoot 6K video without a crop. While this certainly sounds like a tantalizing feature, we do actually have our doubts about this.

Secondly, the recently announced Canon EOS C500 Mark II cine camera only offers 5.9K output. If the 1D X Mark III does offer 6K, we feel it's more likely it'll be 5.9K rather than the full 6K to avoid competing with the C500 Mark II and other Canon cine cameras.

While we may be slightly dubious about the uncropped 6K, we're hopeful that we'll be eating our words come 2020. However, the other information makes perfect sense. Dual CFexpress cards would be a great companion to a camera that's set to be right on the front line at the Tokyo 2020 Olympics, and a bump in resolution would be gladly welcomed.