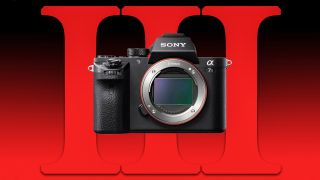 After over a year of speculation, the Sony A7S III has finally been confirmed by the manufacturer itself, as Sony revealed that the camera will be coming in the summer and "everything is new", including the image sensor.

The A7S II was well received by reviewers and users alike, but five years is quite some time in such a fast-moving sector – and the Canon EOS R5 has just arrived like a time traveller carrying specs from the future, with its incredible uncropped 8K video and flagship-caliber autofocus.

The fact that the A7S II was so well specified upon launch has helped it to remain relevant, but models introduced in the meantime – both from Sony with its A7R III, the A9 and the A7 III, and rivals like Panasonic’s GH5S and Blackmagic's URSA Mini – prove that there’s scope for a fitter video competitor.

"I can confirm that a successor to the Alpha 7S II will be coming, later this summer," Sony imaging executive Kenji Tanaka told DP Review. "It will be a complete redesign of the whole system, including the image sensor. Everything is new. We hope it will meet and exceed the expectations and requests of our customers. I’m very confident that our new model will meet their demands."

Both the Sony A7S and A7S II have been designed around a 12.2MP full-frame sensor, and, assuming the A7S III's video output is capped at 4K, we expect the A7S III will offer something similar.

Cameras designed primarily to record 4K footage don’t need to a higher-resolution sensor than this, and the whole point of the A7S line is have a sensor with large, light-hungry pixels at its heart, rather than be a resolution beast like the A7R models.

Sony imaging executive Kenji Tanaka recently told DP Review. "The ‘S’ originally stood for ‘sensitivity’ but now I think it should stand for ‘supreme’ in terms of image quality, and expression. It comes from having really big pixels. I think that many professionals and high-end users will enjoy the new camera."

That last point is an intriguing one – especially in light of the extraordinary Canon EOS R5, which is capable of 8K video via a rumored 44MP image sensor. Tanaka's stressing that the A7S III's sensor will have "really big pixels" suggests that we are again looking at a very modest resolution – perhaps not much, if any, greater than the 12.2MP of its predecessor.

Having fewer photosites (pixels) that are larger in size means that the sensor is more effective in low light situations – particularly if Sony employs the dual native ISO technology seen in the Panasonic GH5S, or Dual Gain Output featured in the Canon EOS C300 Mark III.

A lower pixel count would, however, likely preclude the Sony A7S III from 8K video capability, due to the lack of resolution. And indeed, when asked what the big requests had been from consumers, Tanaka alluded to 4K/60p rather than taking the opportunity to tease 8K.

2. DCI 4K and a wider range of frame rates

For the camera to fight against the likes of the Olympus OM-D E-M1 Mark II and the Panasonic GH5S, we'd expect to see a 50/60p recording option – as predicted by SonyAlphaRumors – and the ability to capture in both 4K options. Faster frame rates for even slower slow-motion footage would also be welcome to see, particularly as these are now appearing elsewhere. 4K HDR shooting is also being rumoured.

3. 10bit recording and no time limit

One area where the A7S II shows its age is with its bit rate – although even upon its release it was clear that some had hoped for more.

The A7S II is capable of 4:2:0 8-bit recording at a bit-rate of 100Mbps, and it can record for up to a second short of 30mins without interruption. 4:2:2 recording, which has twice the colour data as 4:2:0, is possible in an 8-bit format, although only externally through the HDMI port.

Read more: Phillip Bloom explains how anyone can get started with video

When you consider that more modern cameras can record 4:2:2 footage internally at a range of frame rates, and also capture 10-bit footage which gives you a better starting point for grading, this is one obvious area for improvement. It would also be good to see Sony lift the 30min restriction when recording video and offer unlimited recording.

The A7S II's viewfinder has a great 0.78x magnification, and a respectable 2.36million dot resolution, but this is one area we expect to see changes made.Not only do Sony's most recent A9 and A7R III models incorporate a 3.69million-dot alternative with a 120fps refresh rate, but rival models like the Panasonic GH5 and its GH5S variant – and even the cheaper G9 – offer something very similar too.

Luckily, we've recently heard whispers from Sony Alpha Rumors that the Sony A7S III will have the 'world's best EVF' with 9.44 million dot resolution. In comparison, the upcoming Canon EOS R5 is said to only have a 5 million dot EVF.

Sony has taken a little longer than others to incorporate touchscreens into its APS-C and full-frame bodies, and this is one feature that was missed on the A7S II. Now that it's popped up on a number of newer Alpha cameras, however, we very much expect this will make its way to the A7S III.

We see no reason why Sony would drop the tilting mechanism that has featured on previous A7-series cameras, although the company is now using a newer 1.44million-dot panel in place of the 1.23million-dot one that featured on the A7S II, so we would expect this will make the cut too.

Much like the A7R II, many A7S II users noticed the camera's tendency to overheat when recording for prolonged periods of time. This would, very inconveniently, simply cause the camera to stop recording, so a revised internal design that would be better able to keep things cool is definitely something we would have expected to see in the upcoming Sony A7S III.

Fortunately, it appears Sony has listened to user concerns. According to Sony Alpha Rumors, the Sony A7S III will have a new kind of passive cooling system to avoid overheating. We assume that this means that there won't be a noisy cooling vent that could interfere with sound when recording video.

7. Dual card slots with UHS-II support in both

The current A7S II only offers a single card slot for SDHC/SDXC (and Sony’s Memory Stick) media. It could be argued that a second card slot is less of a priority on such a camera than it is elsewhere, given the likelihood of many recordings being output straight through the camera’s HDMI port to an external device.

Even so, as both the A7R III and A7 III have sported a dual-slot design, it would be odd to see the A7S III continue with just the one.

We've also heard rumors that the Sony A7S III will have UHS-II card support, although there's no word on whether this will be across dual card slots or just one. Not sure what this is? We explain it here. One reason not to add one is that it would potentially make the camera physically bigger, although we expect the body to be a little bigger than before anyway, thanks to the next expected feature.

Traditionally, one of the main disadvantages of mirrorless cameras over DSLRs is that they offer a shorter battery life. Bodies designed to be portable mean physically small batteries, and a greater reliance on electronic viewfinder and LCD screens also drain a lot of juice.

Both the A7S and A7S II have been something of a letdown here, with a stated battery life of just 380 and 370 frames respectively, when using each camera’s LCD screen. Battery life on the latter when using the EVF is even more disappointing, at just 310 frames per charge.

It’s likely this will be different on the A7S III because of developments since those models were released. The use of a new Z-series cell inside more recent models has given battery life a considerable boost. The A7R III and A9, for example, whichg both make use of the battery, respectively offer around 530 and 480 shots per charge when using the EVF, and up to 650 if you stick to using each camera's LCD instead. The most recent A7 III model managed to increase this even further, with around 610 frames with the EVF and up to 710 with the LCD.

Sony has put a lot of work into the focusing systems of its most recent models, and we’d be very surprised if we didn’t get some kind of boost here. Here’s a quick look at what the A7S II and each A7-series camera released after that point has offered:

A hybrid system that combines both phase- and contrast-detect AF points is likely to star here. Given that the model is likely to be pricier than the A7 III, it would seem odd if Sony didn’t gift the A7S III with the latest 693/425-point hybrid system, but sometimes there are technological reasons why an alternative needs to be used. Then again, even the A7R III’s older system would be an improvement.

As the A7S models are partly intended for use in low light, we would expect to see at least the same -4EV rating for the AF working range as before, although it wouldn't be a surprise to see this increased even further down to -5EV. Other more recent Sony models typically only stretch to -3EV instead, but they are, of course, designed for different purposes. Panasonic's recent GH5S manages to deliver a working range down to -5EV, so it would be good to see Sony equal this.

A joystick-type control has become a standard feature on many modern cameras, including the most recent Sony A7-series models. Although most cameras allow you to use this to navigate menus and zoom around images, this is principally used to adjust the focusing point. The A7S II lacked this feature, which made it more tricky to quickly shift this in a particular direction, so we’d expect the A7S III to match its siblings in having one designed into its rear plate.