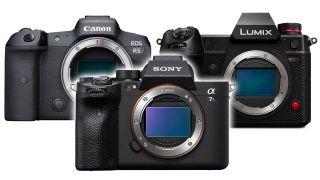 The world has been waiting with bated breath for the Sony A7S Mark III announcement, and now it’s official. Sony’s new video-focused A7 model is a 4K camera in a world where 4K is normal and has already been left in the shade by the latest 6K (Panasonic Lumix S1H) and 8K cameras (Canon EOS R5).

We aren’t comparing chalk with cheese, either – all three cameras cost around $4,000 (the S1H is rather less, actually), so it’s not as if we’re pitching the Sony in above its head financially.

So is it too little too late for the Sony A7S Mark III, or is being Sony’s best 4K camera ever more important than the sky-high video resolutions of its rivals? Let’s compare the specifications to find out.

The A7S Mark III has a new back-illuminated sensor design for better high-ISO performance and 2x faster data readout for reduced rolling shutter effect. Its rivals, however, offer much higher resolutions. The Lumix S1H doubles the Sony’s resolution to offer 6K video capture and good-sized still images, while the Canon’s 45MP sensor makes it not just a ground-breaking 8K camera but a high-resolution stills camera too. The Sony does at least have big pixels for the best possible high-ISO performance.

As we would expect, the larger photosites of the Sony A7S Mark III sensor give it the highest ISO range, topping out at ISO 102,400 in standard mode and ISO 409,600 in expanded mode. The Lumix S1H has twice the resolution and a maximum ISO one stop slower at ISO 51,200 (204,800 expanded), while the EOS R5 has near enough twice the resolution again and a maximum ISO one stop slower than the Panasonic and two stops slower than the Sony, at ISO 25,600 (ISO peaks at 51,200 in expanded mode – another stop slower). If nothing else, we would expect the Sony to give the best 4K video quality in low light.

This makes for interesting reading. The 6K video resolution of the Lumix S1H makes it look more than a match for the Sony A7S Mark III, but it can’t match the Sony’s frame rates for 4K shooting. In fact, to shoot 4K at 60p you have to drop to a Super 35 crop, and it can’t match the Sony’s 4K 120p mode at all. The Canon is a much closer match, with 8K resolution when you need it and 4K frame rates with full width capture to match those of the A7S Mark III when 4K is enough. The Canon can’t match the Sony’s 240p FHD mode, however. On balance, you would have to say that if you need higher resolution than 4K then you need the Panasonic or the Canon – but if 4K is enough, the Sony perhaps does it best (keeping in mind its large photosites) with the Canon a close second.

All three cameras are closely matched for 4K video capture quality, all offering 10-bit 4:2:2 internal capture and Long GOP or All-I compression. The Sony and the Panasonic need an external recorder (Atomos Ninja V) for raw video capture, while the Canon flips this around and can only capture raw internally. Which is odd.

Sony’s Eye AF and Real Time AF has become the stuff of legend in recent times, so Canon’s own Eye AF system has quite a lot to live up to – though first reports suggest it could be a strong contender. These two cameras use on-sensor phase-detect autofocus, but Panasonic sticks with its contrast-based DFD (Depth From Defocus) system, which we’ve found effective enough for stills photography, but less impressive with moving subjects. We expect the Sony to be very good here, but for the Canon to put up a strong fight too.

All three of these cameras have very high resolution electronic viewfinders, but the Sony A7S Mark III takes it a step further with even higher resolution and a higher 0.9x magnification too. For video, a high-quality viewfinder many not be a priority, but for stills it’s a major plus point… it’s just a shame that the A7S III is not really a stills camera.

All three cameras have vari-angle touchscreens, so there's no clear advantage to any of the cameras in that respect, but the Sony's 3-inch 1.44m dot screen seems a bit small and mean compared to the other two. This probably becomes academic if you use an external recorder, but otherwise a vari-angle screen is especially for handheld or run and gun style shooting or gimbal mounting, and the bigger the better.

Panasonic’s decision to stick to the SD card format seemed odd when the 6K Lumix S1H was launched and still seems odd now. Canon has kept one foot in the past and one in the future by offering one SD slot and one CFexpress slot, but Sony has potentially found the smartest solution of all with twin slots that each take two card types. Sony has gone for the brand new CFexpress Type A rather than Type B and Type A cards will only become available at roughly the same time as the A7S Mark III itself, but Sony’s decision may yet prove to be the smartest in the long run.

The winner here, surprisingly given its resolution, is the Canon EOS R5. Even with its mechanical shutter it can shoot faster than the other two, and while the Sony A7S Mark III has a much bigger buffer depth, its 12MP resolution means it can’t really be taken seriously as a stills camera in the same breath as the EOS R5.

None of these cameras can match the capacity of a DSLR, but we’re used to that from mirrorless cameras. The Sony A7S Mark III is a clear winner here, with the Canon second – though Canon only quotes a figure for its ‘power saving’ mode. The Panasonic isn’t too bad at 400 shots, but with all three you wouldn’t want to go on any kind of important shoot without taking spare batteries.

On paper, the Sony A7S Mark III might look a little disappointing, at least to armchair critics. It still only shoots 4K, where Panasonic now offers 6K and Canon offers 8K – and at the same price.

But the Sony’s 4K specifications and capabilities are the best here, with the Canon a close second. The Sony also scores with its proven AF system, big photosites and ISO range, dual (and dual format) card slots and best in class battery life. Sony has designed a camera that can support a cinema shoot as a B camera one day and capture great run and gun footage the next.

6K, 8K and even Blackmagic’s 12K camera might be the future, but Sony has created a camera designed for today.