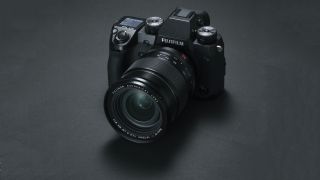 Scroll down for today's best prices

Before the X-H1 was launched, the X-T2 and X-Pro2 were as good as it got for the Fujifilm X-series –and that's to say pretty impressive. With their analogue stylings on the outside and X-Trans CMOS III sensor technology on the inside, and a rapidly expanding collection of glass to be used alongside, it's no wonder that it's been these models that have finally swayed those previously tied to more traditional DSLR systems to the mirrorless.

And yet, the arrival of the Fujifilm X-H1 in 2018 showed that there was scope for making things that bit better. With fleshed-out video options, a generously sized top-plate LCD, an upgraded viewfinder and the advantage of image stabilization at sensor level, the X-H1 manages to build on a successful concept in a range of useful ways.

Move forward a couple of years, with the introduction of the Fujifilm X-T3 and now the X-T4, prices on the X-H1 have got more attractive – particularly if you look around for the best deals.

On top of all that you get a body that's crafted to be tougher than previous X members, with thicker magnesium alloy used in its build and extra weather seals to make it even better protected against the elements, while the beefy grip allows the camera to balance weightier optics more easily.

And that's not all. From the clever three-axis touchscreen on the back and wide range of options to customize all aspects of the camera's focusing systems, right down to the collection of popular Film Simulation modes and option to process Raw files in camera, the X-H1 is a camera that's designed to making getting the shot you need as simple as possible.

Here are the essential details on Fujifilm's premium mirrorless offering